Seattle – Bill Gates is betting the toilet of the future for the developing world will be solar powered. 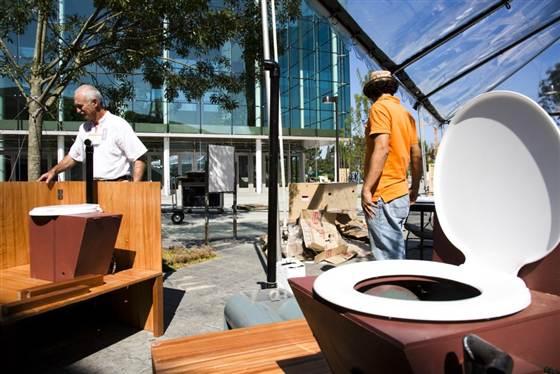 The world’s leading private philanthropist handed a $100,000 (about R800 000) prize to the California Institute of Technology on Tuesday for its work on a self-contained, sun-powered system that recycles water and breaks down human waste into storable energy.

Gates is focusing on the need for a new type of toilet as an important part of his foundation’s push to improve health in the developing world. Open defecation leads to sanitation problems that cause 1.5 million children under five to die each year, Gates said, and Western-style toilets are not the answer as they demand a complex sewer infrastructure and use too much water.

The Microsoft co-founder is looking to change that by sparking new inventions in toilet technology, which he says has not fundamentally changed since the invention of the flush toilet in 1775.

“Imagine what’s possible if we continue to collaborate, stimulate new investment in this sector, and apply our ingenuity in the years ahead,” Gates said at his foundation’s Seattle headquarters on Tuesday. “Many of these innovations will not only revolutionise sanitation in the developing world, but also help transform our dependence on traditional flush toilets in wealthy nations.”

His foundation announced $3.4 million in new funding on Tuesday for toilet projects being worked on by various organisations, bringing total investment in its “Reinvent the Toilet Challenge” to about $6.5 million.

About 2.6 billion people, or 40 percent of world’s population – mostly in sub-Saharan Africa and south Asia – lack access to safe sanitation and are forced to defecate in the open, according to Gates.

Last year the Bill & Melinda Gates Foundation gave grants to eight universities around the world to help tackle the problem by creating a hygienic toilet that uses little or no water, is safe and affordable and can transform waste into energy, clean water and nutrients.

Gates presented prizes on Tuesday to the teams that showed the most progress, handing Caltech the first prize of $100,000 for its working model of a solar-powered bathroom, where a solar panel produces power for an electrochemical reactor that breaks down feces and urine into hydrogen gas, which can be stored in hydrogen fuel cells to provide a back-up energy source for night operation or use in low-sunlight conditions.

The workings of the toilet are designed to be buried underground beneath a conventional-looking stall and urinal set-up, which the Caltech team showed in cross-section at the Gates Foundation courtyard. Water recovered from the continuous process is pumped up again to provide water to flush the toilet.

Gates also handed out prizes to Britain’s Loughborough University [see video of their toilet system] and Canada’s University of Toronto for their designs, which focus on transforming feces into usable resources.

The software pioneer is hoping many of the universities work together to develop the best technologies and is aiming to get new-style toilets into use in the next two to four years.

Gates’ foundation is spending about $80 million a year on water, sanitation and hygiene issues, areas where it thinks it can make a marked difference in people’s lives.

The $370 million in total it has committed to that area so far is still only a small slice of global funding for health, development and education provided by the foundation, which has handed out, or is committed to, more than $26 billion in grants since Gates started his philanthropic endeavours in 1994.

The foundation, which Gates co-chairs with his father and wife, Melinda, is the world’s biggest private philanthropic organisation with an endowment worth more than $33 billion. – Reuters

Hopefully an affordable, commercial version of this toilet will emerge soon – great for poor, water scarce regions as well as for people wishing to incorporate ‘off grid’ systems in self-sustainable, eco-friendly homes and buildings.  Self-sufficiency, especially where water is concerned, is becoming increasingly important, especially in water scarce nations such as South Africa.  Rainwater harvesting systems can help one attain a degree of water independence, especially if space permits the installation of high capacity above-ground or underground rain water storage tanks.

Click on the links below to find your ideal tank and tank stand manufactured by South Africa’s premier water tank manufacturer- JoJo Tanks.