Tips for Designing a Green Home

A significant part of the electricity needed for buildings could be generated using plant-covered roofs within a few years, thanks to research carried out at Wageningen University of the Netherlands. 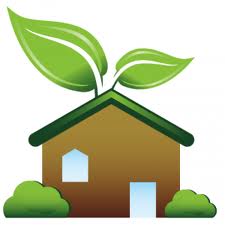 Similarly, fields of crops such as rice could help produce electricity without the requirement to choose between using land for growing food or biofuels.

The technology is based on the principle that plants make organic matter through photosynthesis and some of this passes into the soil as waste. When micro-organisms in the soil break this organic matter down, they also release electrons and protons. The so-called Plant-Microbial Fuel Cell (Plant-MFC) harnesses electricity with the aid of pairs of inert carbon electrodes. An anode in the soil harvests electrons and these combine with protons and oxygen from the air at the cathode, producing water and generating electricity.

This concept was developed in the Environmental Technology Group at Wageningen, led by Bert Hamelers, and was patented in 2007.

The processes that break down organic matter occur all the time, meaning that the technology can work night and day and in all seasons. It can be used with any plants that are happy to grow with waterlogged roots. The initial targets are grasses and rice fields but any marshland could be used, even where the water is brackish or polluted, said the researchers.

In addition, according to Marjolein Helder, who recently finished a PhD in the group, the use of inert electrodes based on graphite or activated carbon avoids the pollution and plant damage that can arise from metal electrodes that corrode. The researchers said that they have found no negative impact on plant growth due to the technology.

“The nice thing with the green electricity roof is that it combines electricity production with the advantages of a green roof, for example water storage and insulation of a building,” said Helder. “At the moment it’s quite expensive because it’s labour intensive and nothing is pre-fabricated. It’s going to take time to automate but when we can get the labour costs down it will probably be cheaper than solar panels.”

The group has developed a pilot electricity generating covering on the flat roof of the Netherlands Institute of Ecology. This can currently generate 0.4 W of electricity per square metre of plant growth. According to Helder, approximately 15 square metres of plant growth on a roof is sufficient to charge a mobile phone.

However, the team believes that in future it will be possible to produce as much as 3.2 W per square metre of plant growth, meaning that a 100 square metre roof could generate enough electricity to supply an average household.

“Scaling up is one of our big challenges,” said Helder. Plans to improve the power output involve work on the materials for the electrodes, development of their positioning and increasing the number of electrode pairs. “Right now we only use one pair of electrodes per square metre and one pair gives about 1 V,” Helder added. “To produce electricity efficiently we would need to produce 5 V or 12 V, either by making a series of electrodes or using power converters. We still need to figure this out.”

In 2009 Helder and her colleague David Strik founded a spin-off company to commercialize the technology. Plant-e launched its first product in November at Helder’s PhD party. The product, a consumer gadget that uses electricity generated at the roots of a common house plant to make a globe spin, is initially on sale in the Netherlands for around €60. The gadget has three aims: to familiarize Plant-e with the market, to begin to introduce the concept to the public, and to generate cash flow. This third aspect is important as the company is still operating on grants and subsidies.

Plant-e hopes to do another pilot of the technology in 2013 and then begin to develop modular electricity generating systems, with the first of these products on sale in 2014. Helder envisages that Plant-e might develop initial products itself and then license the technology to a larger company for mass production. “It’s really a platform technology that enables us to develop many useful products,” she said. “There’s enough room for a lot of companies to work on this.”

This type of technology will become more readily available and affordable in the future but for now, why not use your rooftops to harvest a free resource – rainwater?  Businesses and homes can reduce water bills and become less dependent on municipal water supplies by investing in rain water tanks.  The scale (and budget) of a rainwater harvesting system can be as simple as a single rain barrel to more sophisticated integrated systems with multiple above ground water tanks or underground water tanks.  Water tanks should be chosen carefully as there are so many types and brands to choose from but there are also many water tank brands that are of inferior quality and should not be allowed into South Africa.  We recommend JoJo Tanks products – affordable and of high quality. JoJo Vertical & Horizontal Tanks are the first and ONLY tanks in South Africa to be tested and approved as “fit-for-purpose” by CSIR’s Agrément SA (Certificate no 2011/385) and have an FDA-approved, food-grade black interior lining.  Click on the links below to find the right jojo water tank, jojo rainwater tank, jojo tank stand or other JoJo Tanks product according to your needs and budget.