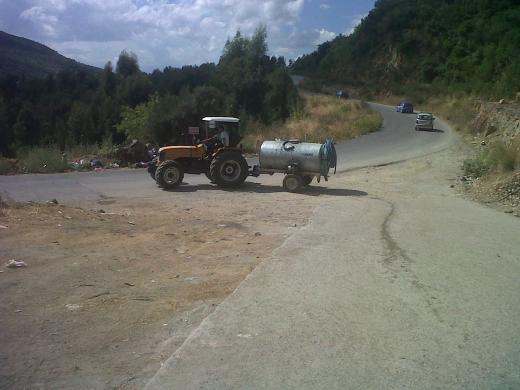 A tractor pulling a water tank on its way to be filled up at an Algerian spring.
Photo: KAMEL KACI

The mountainous district of Bouzeguène, situated in northern Algeria’s Kabylie region, has been suffering from recurring water shortages, much to the anger of local residents. Our Observer points the finger at an obsolete pipe system and poor management by the state company in charge of water distribution.

Bouzeguène is the central water distribution point for several dozen surrounding villages. A 1500 cubic metre water tower was constructed there to redistribute water to surrounding areas via much smaller water towers. However, according to our Observer, the system of pipes linked to the large water tower is leaking at several spots, slowing down supply and leading to a drastic reduction in the amount of water delivered to certain villages.

The pipes installed in the middle of the 2000s leak everywhere. It replaced an old network that had become completely useless, because many consumers had simply pierced the pipes and connected their homes without paying for it. We don’t have the proof, but we suspect the current leaks are due to new acts of sabotage.

In any case, the new system hasn’t even been completed. In certain parts, often at the final turn before entering a village, the piping ends. Why? No one knows. This negligence can be partly blamed on ADE, the state water provider, and companies charged with managing the pipes’ construction. ADE technicians are trying to repair the holes, but they don’t know where to start [ADE, contacted by FRANCE 24 for comment, has yet to respond].

Like others, I’ve bought a 1,800-litre water tank for my house. I fill it up with water from the tap when it flows every 10 days or so.

As a consequence, it has become very hard to fill the water towers. It’s particularly hard during the six months of drought during the summer. Therefore, people have to improvise. Some have purchased water tanks and attached them to trucks. They go and fill them up at springs, and redistribute the water to the villages, but this is expensive. Others go and fill up their own containers at the fountains, but there are often queues, and the process takes a long time.

Being water self-sufficient is a huge advantage in today’s world where water scarcity is increasing, especially in water scarce nations such as South Africa.  Rainwater harvesting during the rainy season is a good way to stock up on good, clean water for the dry season or during municipal water supply cuts.  Rain water tanks can be had in numerous types and sizes, including underground water tanks.  Plastic or polyethylene water tanks combine a number of advantages of steel, fibreglass, concrete and other types of tanks.  Plastic water tanks are easy to install, relatively light and easy to transport, do not crack or rust and they are relatively inexpensive.  However, cheap/poor quality plastic tanks are not worth buying as they will not last very long and may leach harmful chemicals into the stored water.  We recommend tanks made by JoJo Tanks (South Africa); click on the links below to find your ideal JoJo water tank, JoJo rainwater tank, JoJo tank stand or other quality JoJo Tanks product.