Texas, USA: Saving Up for a Dry Day

AUSTIN, TEXAS — Last year, as a ferocious drought tightened its hold on Texas, John Kight, a landowner in the Hill Country west of here, was getting calls. 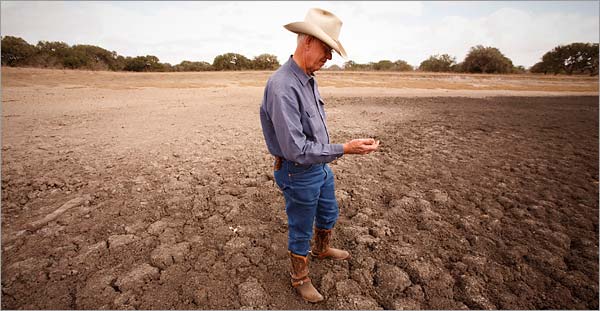 Eleven years ago, Mr. Kight installed a rainwater harvesting system at his rural home, and as wells started to go dry around the state in 2011, other Texans wanted tips for collecting and storing water from the sky.

“A good rain is just like a deposit to a bank,” said Mr. Kight, who gives talks on rainwater harvesting around Texas and is also an official at his local water authority, the Cow Creek Groundwater Conservation District. “It works exactly the same way.”

Collecting rainwater is an ancient idea, done in places like India and Rome before people could rely wholly on centralized piping systems. These days, the concept is returning to advanced economies, especially in drought-stricken areas. Germany is a leader in rainwater harvesting, with more than 1.5 million systems in homes and businesses, according to Dietmar Sperfeld, an official at the Association for Rainwater Harvesting and Water Utilization in Germany. Britain has about 100,000 systems, with 5,000 being added each year, according to estimates by Terry Nash, director of the U.K. Rainwater Harvesting Association.

The concept is fairly simple. Large water tanks store captured rainwater that has been filtered. The water is piped to the garden and sometimes into the home for nondrinking uses, like flushing toilets. Further treatment is required to make the water safely drinkable, so most homes with rainwater systems also rely on the local water supply or wells.

Because separate pipes are needed to keep rainwater out of the tap, it is more cost-effective to install the systems when a home is being built, as opposed to retrofitting an existing home, according to Mr. Nash. He puts the average price of a system at about £2,000, or $3,175, for a new home, including installation costs. Mr. Sperfeld, of the German rainwater group, puts the price at €4,000 to €6,000, or about $5,000 to $7,500, for a rainwater system that includes water for flushing toilets and running washing machines. Many German companies manufacture rainwater harvesting equipment, he said.

The increasing interest in rainwater harvesting stems from rising water bills, drought and environmental awareness. The idea of creating one’s own water supply can also be liberating.

“The rainwater way is the way you can control your own destiny,” said Mr. Kight, the Texan.

But the systems are not for everyone. The first barrier is the high upfront cost. Incentives offered by German states to make installation less expensive have largely ended, Mr. Sperfeld said, with only Bremen and a scattering of local communities still helping businesses or homeowners with costs.

Other obstacles include a lack of space for water storage tanks. This, of course, is most relevant to cities, where homes are densely packed. The systems also require regular maintenance, like cleaning the filters.

And things can go wrong. David Butler, director of the Center for Water Systems at the University of Exeter in England, said that in one building his group monitored, the rainwater harvesting system had failed over the course of a few months. The problem turned out to be easy to fix, but “nobody noticed (except us) because the backup system kicked in,” he said in an e-mail. “So, these systems are not fit-and-forget.”

Mr. Kight, who lives so far out in the country that his system includes ultraviolet disinfection to allow him to drink the rainwater, said that he got through the recent drought with his 41,000-gallon, or 155,000-liter, storage system still half-full. He argues that rainwater harvesting goes hand in hand with a sustainable approach to water. He does not run sprinklers on the grass, and his appliances are all low-flow.

Rainwater harvesting systems need not be complicated nor costly; many homeowners begin with a small rain barrel or rainwater tank connected to a single gutter (the rainwater is often only used as a supplementary source of water for garden irrigation).  However, most who start this way soon realise the benefits of rainwater tanks and then go on to install more complex, whole-house rainwater systems with much increased water storage capacity.  In urban areas, space for water tanks can be an issue; underground water tanks can help to solve this problem (some plastic underground water tanks have been designed to be installed under driveways and are robustly built).

As the above article mentions, water-saving and money-saving are not the only reasons to install rain water tank systems; the freedom and independence from municipal supplies is a big bonus, especially in countries like South Africa where many municipal water services are failing dismally.  Check out the range of JoJo Tanks products available in South Africa by clicking on the links below (JoJo Tanks manufactures a wide range products including water tanks, rainwater tanks, tank stands, septic tanks, chemical tanks and more).