STOCKHOLM (IDN) – Rapidly escalating demands for limited water and land from all sectors of the economy call for urgent solutions. 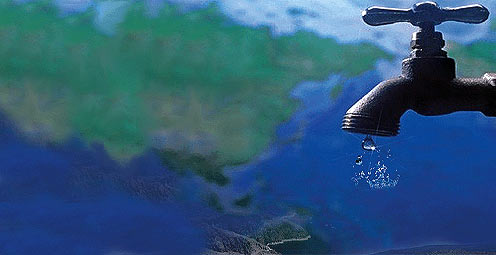 This is what over 2500 political and business leaders as well as representatives of 200 international organisations will strive for at the World Water Week in Stockholm, August 26-3, 2012.

In more than 100 seminars, workshops and events spread throughout the week, participants will meet under the theme ‘Water and Food Security‘. The World Water Week in Stockholm is an annual global forum to review progress, build capacities and promote partnerships to address increasing water and development challenges.

Ministers and high level government officials will be joined this year by CEOs, scientists, chief economists, heads of UN bodies and participants from over 200 convening organisations and more than 100 nations.

Experts at the event will debate and showcase solutions to ensure that the planet’s limited water resources are efficiently used to meet the needs of growing populations and prevent water shortages, floods and droughts from constraining economic growth.

Today, nearly one billion suffer from hunger, another two billion suffer from undernourishment, while at the same time over one-third of all food is lost or wasted. Demand for food and fibre is projected to increase by 70 per cent by mid-century and, without intervention, will place untenable pressure on water resources in many regions in the world.

A background note by the Stockholm International Water Institute (SIWI) points out that agriculture is the thirstiest sector by far, accounting for 70 per cent of all global freshwater withdrawals. Feeding the world population requires large volumes of water and land – resources already under increasing pressure from all sectors of the global economy.

As the world undergoes rapid alterations, lifestyles and food habits change, demands for water intensive foods such as meat are increasing. Meeting the increased demands for food by 2050 using today’s technologies would require 50 per cent more water than is used today, according to knowledgeable sources. Access to water already limits agriculture in some regions of the world, and climate change is posing new challenges such as increasing rain variability and prolonged droughts.

However, the potential for improvements is great, say a World Water Week brief. There are a variety of techniques, technologies and investments that can enable farmers to grow more ‘crop per drop’.

The Consultative Group on International Agricultural Research (CGIAR) estimates that investment in international agricultural research in developing countries can deliver as much 9 dollars’ worth of additional food produced for every dollar invested by finding, for example, drought-tolerant crop varieties and hardier livestock breeds that are more resilient to climactic variability. With widespread action to improve the efficient and fair use of available water resources, it is possible to sustainably double agricultural production in the coming decades.

SIWI points out that climate change is felt foremost through a change in water availability and variability. An altered climate means changed rainfall patterns, and increased risk of both floods and droughts. Almost two billion people were affected by natural disasters in the last decade of the 20th century, 86 per cent of them by floods and droughts. IPPCC estimates that a global temperature increase of 3-4 degrees C could cause changed run-off patterns and glacial melt forcing an additional 1.8 billion people to live in a water scarce environment by 2080.

This puts strains on existing infrastructure, which in some cases need to be replaced or updated. It also brings additional stresses on farming systems, both rain-fed and irrigated. Early Warning Systems are needed to prevent disaster from storms, floods and droughts, but do not always result in pre-emptive action. There were warnings that predicted potential famine before the disaster struck in the horn of Africa in 2011, failure to respond to those warnings at a number of levels contributed to the crisis.

There is no doubt that global climate change brings new challenges. In 2011, China, the Middle East and the United States all also suffered from some of the worst droughts in years, which amounts to hundreds of millions of dollars in lost income. But, can a changed climate also bring new opportunities, leading to more resilient governance strategies and business decisions?

Rush for Land Really or a Rush for Water?

Investment in agricultural land by international actors has increased dramatically in recent years. The food price crisis in 2008, initiated by droughts in grain-producing parts of the world, triggered an international rush for farmland, primarily in Africa and Latin America. Liberia has been the most aggressive nation in the land market, and has already made 61 per cent of total agricultural land available to investors.

The potential effects on local farmers and land rights were rapidly brought to global attention, and many have termed it land grabbing. Others see little difference between investment in land and other forms of Foreign Direct Investment.

Up until the World Water Week, there has been a surprising silence on one fundamental aspect of this rush; the water that is needed for agricultural production on the acquired land.

The majority of investors come from regions facing water shortages and increasing demand for food, such as China, India, and the Arab Gulf countries, who may be investing in land in order to gain access to water resources. New investments from North American and European funds and corporations have also expanded quickly in recent years. The rapid increase in cultivated farmland will require significant quantities of water to sustain production. The majority of land lease contracts, however, contain no legal arrangements for water use on the territories.

Water use for irrigation in land leased by foreign parties is also absent from regional discussions over transboundary waters in the majority of shared basins around world. Land leasing will have a big impact on local development and the global food market. But for better or worse?

Plugging the Leaks in the Global Food System

Nearly forty years ago, at the First World Food Summit in 1974, former U.S. Secretary of State Henry Kissinger stated that “no child will go to bed hungry within ten years”. Every night, one out of seven people will go to sleep with an empty stomach at a time where per capita food production is at a historical high. There are great imbalances in the global food system. There is more than enough grown to feed all seven billion of the world’s inhabitants well. Still, one billion people are undernourished, two billions are undernourished and one billion is overeating.

The best scientific analysis done to date estimates that at least one-third of all food that is grown goes to waste. FAO places a conservative estimate that 1.3 billion tons of food goes uneaten every year. That is food that we invested our water, land, financial and energy resources in to produce, all of which goes to down the drain. Reducing losses in the food supply chain has the potential to save water and production costs, and increase profitability for farmers and companies, says SIWI.

It points out that losses accumulate during the harvesting, threshing, transport, distribution, processing and storage of food before it reaches the consumer. Investments in improved harvesting, storage, transport and cooling infrastructure can reduce losses significantly.

In more advanced economies, less is lost in the field but more is discarded into the trash bin. In the United States, 40 per cent of food purchased is thrown away either in the market or by the consumer. That is billions of dollars and trillions of litres of water sent down the drain each year.

Water is indeed a global priority as the demand for it increases beyond conventional supply sources.  Water efficiency and better management of scarce water resources in dry countries like South Africa needs effort from everyone – from the individual level to corporates and government institutions.  Free water can be obtained by harvesting rainwater; rainwater tanks can store rain water from the rainy season for times of need during the dry season.  Surplus rainwater can be used during the rainy season to supplant municipal water.  The amount of rainwater that can be stored is only limited by roof area (or other rain harvesting surface) and space for water tanks.  Click on the links below to view the wide range of JoJo Tanks products available in South Africa.