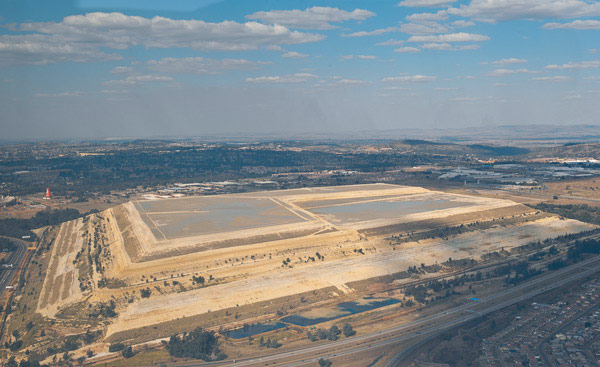 In response to the environmental risks posed by abandoned mines, mining companies are legally required to set aside money to clean-up mining operations before they are officially closed. Research published in a new WWF report indicates, however, that mining companies in South Africa are not fulfilling this obligation adequately.

In 2009 the Auditor General estimated the bill for cleaning up existing abandoned mines to top R30 billion. This figure will continue to grow unless mining companies and governments act quickly to close loopholes in the process to fund clean mine closure.

The incidence of acid mine drainage (AMD) and the high number of derelict and ownerless (D&O) mines, as well as dangerous sinkholes and collapsing entry points, particularly in the Witwatersrand gold fields, have effectively brought the consequences of inadequate environmental rehabilitation in the mining sector into sharp focus.

The newly released Financial Provisions for Rehabilitation and Closure in South African Mining: Discussion Document on Challenges and Recommended Improvements report, commissioned by WWF-SA, recognises that Mining in South Africa is a key element of economic development. However, ongoing concerns regarding environmental degradation in mining areas, the high number of ownerless and abandoned mines, and the incidence of AMD have highlighted the need for improved environmental maintenance and rehabilitation in the mining sector. In addition to this, there is growing public concern that those who profit from mining are not footing the bill for environmental damage caused by their operations.

The report, launched 15 August 2012, was written by a team of experts from the University of Cape Town’s School of Economics and Department of Accounting, Independent Economic Researchers and other independent consultants.

WWF-SA commissioned the report in order to examine how South Africa is failing to; assess how much money will be needed for mine clean ups, including long term water treatment; secure and report on the funding available to rehabilitate specific mines; and ensure that the funding is available over the time scales needed for clean-ups. The report also gives an assessment of the current regulations and practice of mining companies and recommends solutions to the current short-falls.

According to WWF’s Freshwater Programmes Senior Manager, Christine Colvin, “Mining companies are legally obliged to set aside money to rehabilitate mined areas and clean-up pollution in the long term. However, this system is currently failing South Africans. The estimated bill for cleaning up the AMD in the Witwatersrand is over R2 billion. Tax payers are expected to foot most of these costs, as the polluting mines have in many cases stopped operating.”

Key concerns highlighted in the report around the current practice of financial provision estimation include:

According to one of the authors of the report; Dr Hugo van Zyl of Independent Economic Researchers, “Addressing the environmental costs of mining is clear policy priority. However, the systems for making proper financial provision for closure and reporting on them in company accounts need significant improvement.”

Colvin adds; “South Africa’s mining industry is the one of the largest in the world and mining accounts for nearly a fifth of the country’s Gross Domestic Product. While jobs and revenue generated by mining are essential to the South African economy, the costs of mining borne by the environment, mine neighbours, downstream water-users and the tax payer are an unacceptable consequence of a poorly managed sector.

“Additionally, the impacts of abandoned mines on the environment are often felt by rural communities who do not have access to basic municipal services (such as piped and treated water supply), and are therefore directly reliant on natural resources for their food and water. These communities are the most vulnerable. For these reasons we urge government to act now to prevent further degradation of our rivers and aquifers”.

South Africa as a whole derives enormous economical benefits from mining however, at what cost to the environment is acceptable?  There is no doubt that there are many South African mining companies that do not pay much attention to the environmental degradation they cause, including pollution of our water resources (as has happened in Carolina, Mpumalanga).  State enforcement and penalties for environmental non-compliance are seriously inadequate and if a mine is found to be polluting, the small fines are laughable.  Perhaps countries that import our mining products should become more discerning and insist on only purchasing from mining operations with some kind of eco-certification (as in many other sectors such as agriculture).