Save water and electricity in your bathroom 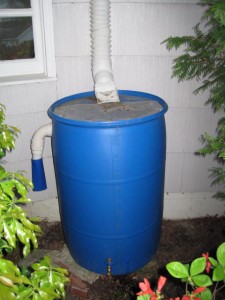 What’s the use of one blue barrel with 55 gallons of rainwater against a severe, years-long drought?

It can provide a mulched raised vegetable bed, measuring 4 feet by 8 feet, with enough water to survive until the next rain. It can keep koi happy and calcium spots off of orchid leaves. It can prevent trash and yard chemicals from polluting storm sewers, creeks and rivers downstream.

And it can provide a nice little glow for your part in conserving the local water supply.

Rain rolling off roofs and gurgling through gutters is valuable these days. More and more, gardeners and conservationists are collecting runoff as a hedge against drought and as their contribution to conserving water.

Fulfilling the state’s water needs is a major issue in this year’s legislative session. The 50-year water plan under discussion counts on conservation for almost one-fourth of the additional water supplies needed in Texas over the next 50 years.

Most home rainwater-harvesting systems start small, often with a big, blue plastic barrel or water tank. The barrels are used in classes taught through the Texas AgriLife Extension Service and master gardener groups.

One 55-gallon barrel is not going to hold enough to water your lawn, but it will water a lot of houseplants, says Clint Wolfe, urban water program manager for the Texas A&M AgriLife Extension and Research Center in Richardson.

Rainwater harvesting is “very practical for this region,” he says.

In the classes, participants learn to assess how much water their landscapes need and how much they can gather from their roofs. This is far more than all but a few households can store. Registration includes a starter barrel, usually recycled from the food industry.

Participants learn how to cut a hole in the lid, install screening to prevent mosquitoes from laying eggs and install a spigot to use the water.

A little rain also can go further than many think. With 600 square feet of a roof’s surface — just a small section of a typical house’s roof — draining through one downspout, it takes about three minutes to fill a barrel in a moderate rain, Wolfe says. Barrels or water tanks can be linked together to capture more water and others can be added at additional downspouts.

Most who come to the classes don’t stop with just one, he adds. They come back for more.

Dotty Woodson, a water resources specialist who teaches AgriLife rainwater harvesting classes, started with two. She used the barrels to mix water for her backyard koi pond, neutralizing chlorine and other chemicals in the water.

Then she realized that rainwater had no chlorine or salts that would harm her fish and could be collected as it ran off the roof. In 1991, she started using the barrels to collect water from her greenhouse roof and poured it into the pond. The result: healthy fish and less work.

Furthermore, “rainwater doesn’t leave calcium spots on my orchids,” says Woodson, who cultivates a greenhouse full of the exotic plants.

Currently, she has 10 linked rain barrels at her Fort Worth property and plans to add a 1,500-gallon water tank.

The biggest barriers to such a system are cost and city and neighborhood regulations.

Since ordinances and regulations vary, homeowners should check with their city before installing a major system. In general, municipalities prohibit water tanks in a front yard, and water tanks in side and backyards must be screened. The collection opening also must be topped with a screen for mosquito control. Homeowners associations, by state law, can regulate where tanks are placed but not forbid them.

A few suburbs have offered rebates or credits to homeowners who install a barrel after taking the AgriLife class.

Still, the city encourages rainwater collection. “We are in favor of anything that saves water,” Davis says.

For some, cost is a problem. Systems capable of providing all or a major part of lawn irrigation can run upwards of $5,000. With water rates relatively low, that can make payback time more than a decade.

But rainwater use doesn’t have to cost a lot. Barrels built at AgriLife classes are $50 each. Many garden centers carry a range of sizes and styles, and they are available online from multiple sources. They range from plain, plastic containers to recycled whiskey and wine barrels to sculptural, high-fired terra-cotta urns.

Georgia Rayna, who lives in North Dallas, liked the idea of rainwater harvesting but didn’t like the look of the barrels. “We just couldn’t put those out in our yard. They just looked industrial,” she says.

She and her husband, Jonathan, painted designs on their containers, even though it’s a lot of work. One has a Southwestern theme; another is painted like a whiskey barrel. A third looks like a wall covered with vines. The fourth is a work in progress and is the most ambitious. It will show the life cycle of several animals living near a pond.

“I have had so many people stop at my house,” Rayna says, “and say, ‘What are those and how did you do it?’”

Ruth Klein also has painted several of her water collectors. She has four barrels and a 250-gallon water tank in the back. Her first is painted the same color as her North Dallas house, and no one notices it. The one in front of her house is plastic but terra cotta in color and sculptural in shape, so it enhances the landscape rather than being an eyesore.

“It looks really beautiful,” she says.

Furthermore, you can’t only consider what you save in water costs, says Brad Ackerman, a Kaufman County master gardener and rainwater-harvesting specialist. You have to consider the cost of replacing plants that might die in a drought. That makes the cost of a rainwater-collection system a lot more practical.

He lost several fruit trees to drought a decade ago, and “I was looking for ways to get some water to keep things alive when there are water restrictions,” he says.

He started with the blue food-safe barrels and then added three 500-gallon tanks hooked to a drip-irrigation system. He also has a couple of 275-gallon tanks and, now, close to 350 gallons in the blue barrels.

Ackerman could not say how much he has spent on water tanks, but he says it’s cheaper than continuing to lose trees and plants to water restrictions. The cost of replacing landscape plants or old roses can be considerable, he says.

Collected rainwater also has proved convenient. Gutters on his chicken coop fill barrels that provide fresh water for poultry. A system for a shed uses collected water to keep another tank replenished. As ducks, guineas and other fowl drink, the water automatically refills.

Ackerman used to spend a lot of time hauling water for the ducks.

“I don’t know if you’ve ever raised ducks, but they are the dirtiest thing you can grow in a pen,” he says.

Another benefit of a rain barrel is that it teaches people how precious water is, Wolfe says. “It’s a key lesson. When your 55-gallon barrel is empty, it’s empty,” he says. “It really gets people thinking.”

There should be no reason to wait for a drought or for a water crisis to occur, especially in dry countries like South Africa where water tariffs are set to increase drastically.  While installing a small rain barrel or water tank has many benefits, we recommend installing bigger water tanks such as a 5000 litre tank, 10000 litre tank, 15000 litre tank or even a 20000 litre tank.  The reason is that even a small rooftop with several downspouts for the gutters can collect so much rainwater in a single rain event that small rain barrels can start overflowing within minutes.  Of course, space and aesthetics can play a role when choosing water tanks; underground water tanks can be installed in this case.  Click on the links below to view the wide range of JoJo Tanks products available in South Africa.