The ICRC launched a project in September to strengthen the existing water distribution network, including water tanks for storage, in Yusuf Batil refugee camp, one of four camps in Maban county, close to the Sudanese border, and the worst hit by water shortages. 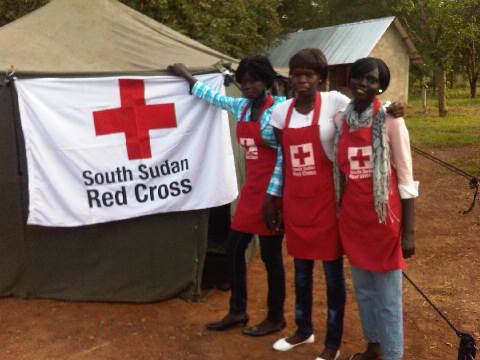 Some 37,000 people have found refuge in Yusuf Batil. The ICRC is installing piping, water storage tanks, tank stands, taps and pumps, especially on the camp’s peripheries where water is least available.

“People are not getting enough clean water in the camp. Hygiene suffers as a result and this has contributed to the spread of diseases such as diarrhoea,” said Adrian Zimmermann, who is in charge of ICRC assistance programmes in South Sudan. “Together with other humanitarian organizations we are working to increase water supply and we are also putting tap stands closer to communities to stop people having to walk so far for water.”

In Jamam refugee camp, also in Maban county, the ICRC has now completed installing a 15-kilometre water distribution pipeline to help maintain a regular supply to the refugees there. Jamam is a natural transit point for the flow of newly arrived refugees, which has largely subsided since the last major influx in May and June. “Those strong enough to have made the journey from Sudan in recent weeks and months waded through waste-high muddy water to get there,” explained Mr Zimmermann. “However, now the dry season is upon us, it will be easier for people to move. There is a real possibility more refugees reach the camps.”

In all four refugee camps in Maban country, jerrycans, buckets, soap and washing basins were also provided in an effort to improve hygiene practices. “We are trying to ensure that families collect and store water safely,” said Mr Zimmermann.

In addition, the ICRC has distributed household items to the most needy families in the four camps. A total of 80,000 refugees received additional clothing, tarpaulin, blankets, mosquito nets and sleeping mats to protect against the elements and help prevent malaria and respiratory infections.

Aid organisations such as the ICRC prevent millions of people dying unnecessary deaths throughout the world.  South Sudan’s water shortages are exacerbated where high concentrations of people, such as in the refugee camps, struggle to obtain enough water to survive.  It is ironic that in many similar situations, there is an abundance or rainfall but no means to collect, store and purify the water for consumption.  Rain water tanks filled by simple rainwater collection improvisations could add valuable quantities of potable water to the supply.