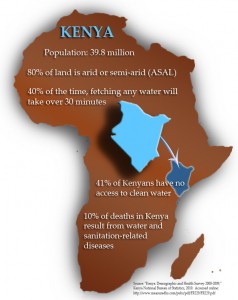 The most common crimes are theft, muggings and illegal disconnections of water pipes by thieves who collect and sell the water. Many of the crimes occur in urban slums, which lack sufficient piped water.

“Since 2003, we have made piped water available to at least half of the slum residents in the entire country, but we are faced with severe hurdles as populations continue to grow and demand for the commodity continues to increase,” said Peter Mangich, acting director of water services in the Ministry of Water.

Police statistics show that in Kibera – Nairobi’s largest slum with over one and a half million inhabitants – there are as many as 75 reported incidences of water-related theft daily.

Police say they believe many other cases go unreported since residents fear reprisals.

In Nairobi’s Kawangware slum, the problems are the same but the reported thefts are half those in Kibera. The reason? Kawangware borders on Lavington, one of Nairobi’s most affluent suburbs.

Police say slum residents, instead of stealing from others in the slum, sneak into Lavington to steal water. Affected Lavington residents have asked the government to intervene.

Studies currently being conducted by the University of Nairobi suggest that water scarcity may drive worsening domestic and international conflict.

“What we are witnessing in the slums is very serious. Some think that water theft is petty, but we are living with a time bomb,” said Makumi Mwagiru, a professor at the Institute of Diplomacy Studies at the University of Nairobi.

Most cases involving water crimes rarely make it to court, he said, largely because Kenyan police view water theft as a petty offense.

But “there have been incidents where people have been killed that relate to water,” he said.

In July, a Kenyan newspaper, the Daily Nation, reported that an old man living in Kenya’s Rift Valley killed another man with his walking stick after being refused permission to jump to the head of a long queue of people waiting for water at a community well.

Because the man with the walking stick was over 80, the court ordered him to pay the family of the victim a camel as a fine and did not seek a jail sentence.

Gladys Murimi, who lives in Korogocho slum in Nairobi, says home break-ins and water thefts are an ongoing problem in her neighborhood. She regularly has her window panes broken and three times has had thieves steal plastic containers of water from her home.

“I am currently looking for a better place to stay since my job is well paying and do not want to reside in the slum anymore. My immediate neighbors have also been affected,” she said.

Kenya police spokesman Eric Kiraithe said that last year more than 16,000 water crimes were reported to police. He said the crimes were taken seriously and many thieves were prosecuted.

But a junior police officer in the Kenya police, who did not want to be named, said that corruption in the force is a problem in combating the water thefts.

“Once my colleagues arrest someone who has, for example, stolen a jerry can of water, they release that person after just one hour instead of going to court. The courts usually give very lenient sentences for such crimes. One may pay a (small) fine.”

Another problem, he said, is that people caught for thefts are often quick to try to bribe officers to release them, sometimes even offering more than the fine they would have been charged.

“Those arrested do not usually know their rights. For instance, one may pay the police huge bribes to be released, an amount more than what he can pay as a fine. Police usually take advantage of ignorant offenders,” said the officer who is attached to the Central Police station in Nairobi.

Water thieves who plead guilty are often sentenced to do community service, such as sweeping courtrooms for a day, the officer said.

He said that regular water shortages sometimes make people do desperate things such as breaking into people’s houses and taking water.

John Munyua, a psychologist in private practice in Nairobi, agreed.

“Clean water is very vital not just for drinking but for bathing and cooking food. People will also steal any food they find,” Munyua said.

“Arresting the offenders does not make them stop. The only way forward is to give them employment and other alternative methods of income generation,” he said.

Source: AllAfrica (By Gitonga Njeru who is a science journalist based in Nairobi)

So many of us take water for granted; those of us fortunate enough to have running water in our homes may find it difficult to understand the desperation of people who have no access to water.

Water theft begins on the individual level and rises to where huge corporations steal water.  The future is likely to see increased international water crimes where nations divert rivers or even invade other nations to take control of water resources- water wars will become a reality.