Save water with xeriscape landscaping 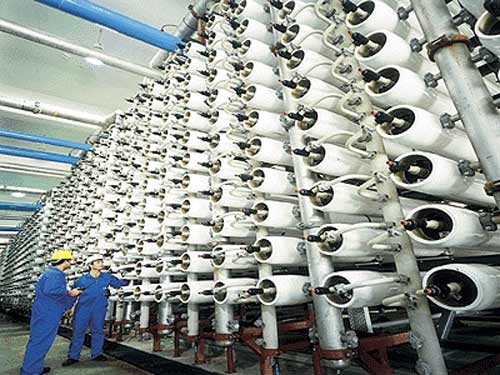 Ashkelon, Israel — Abraham Tenne tilts his head upward and takes a gulp of water from a paper cup. But this isn’t your average cup of water. It’s just come directly from the briny Mediterranean Sea.

At the Ashkelon Desalination Plant, a 28-acre complex some 40 miles (70 km) south of Tel Aviv, 15,000 to 16,000 cubic meters of seawater is converted into fresh water every hour — if you can imagine it, that’s about 15 to 16 million one-liter plastic bottles.

The plant churns out 15 percent of Israel’s yearly water supply.

The technology that turns the sea into fresh, potable drinking water isn’t new, but now it’s changing the game for Israel, where a severe water crisis threatens the country’s very existence.

The country’s population of 7.8 million people is growing at a rate of 1.8 percent a year. Meanwhile, severe drought has plagued this largely desert nation over the past decade — it’s been so severe that Tenne, chairman of Israel’s Water Desalination Administration, compares it to biblical misfortunes: “If you remember the story of our ancient fathers who had seven good years and seven bad years in the time of Moses, in Egypt, we had the same seven years. Only it was in the last seven years.”

Although in 2012 the country experienced a cold and wet winter that caused water levels to increase once again, there’s no expectation the water shortage will end anytime soon.

That’s because Israel’s aquifers have been drying up, and the Sea of Galilee, known here as “Lake Kinneret,” which supplies the country with 35 percent of its freshwater needs, has fallen to extremely low levels, creating a large gap between supply and consumer demand. Officials believe it is only going to get worse unless something drastic is done.

Desalination can be a partial solution to the global water crisis and many countries, South Africa included, have begun to invest in desalination plants.  However, desalination plants consume vast amounts of energy and can have severe negative effects on the environment.  Water conservation needs to begin at the individual level.  Households and businesses can obtain free water by installing rain water tanks.  Many rooftops provide ideal surfaces for harvesting rainwater.  Depending on the roof area and rainfall characteristics, enough rainwater can be stored in water tanks to cover most of a houshold’s water requirements.  Invest in water tanks and save money and water.  See links below for the various poly tanks and steel tank stands that are available from JoJo Tanks, South Africa.