Residents of Ecuador’s rain forest have spent 18 years fighting American oil companies that they say poisoned their water and land. 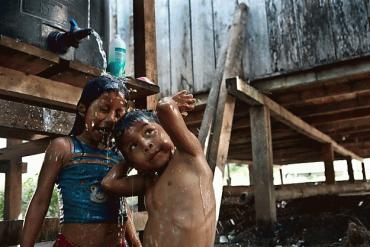 Ecuadorans rinse off with water from a system to collect rainwater installed by veterans of the 18-year legal fight with oil firms to clean up the tribes' contaminated water. The ClearWater Project has put in 52 of the systems so far. Photo by Kayana Szymczak

And while their lawsuit grinds on, the water remains tainted. So several veterans of the legal fight have set up a charity to bring clean drinking water to Ecuador’s oil patch, one home at a time.

The ClearWater Project buys and installs rainwater tank systems that catch, filter and store rainwater as it rolls off roofs. Fifty-two of the systems have been installed among the area’s indigenous tribes.

“The whole point of this is that the tribes have suffered for a very long time,” said Mitch Anderson, one of the project’s founders. “They’ve waged a very heroic and dignified lawsuit, which has become a monster, a beast. Someday there will be a resolution to this. But in the meanwhile, the tribes are looking to survive on a daily basis.”

Like everything else in the lawsuit, which now targets Chevron Corp. of San Ramon, the extent of water contamination around Ecuador’s oil fields remains the subject of bitter dispute.

Chevron blames the area’s industrial pollution on the state-run oil company, Petroecuador, but insists that water in the area isn’t as contaminated as opponents say – at least not by oil. Bacterial pollution from a lack of sanitation is a bigger threat, according to Chevron.

Regardless, people in the area don’t trust the water that they must drink.

“In none of the communities has there been clean water, so clearly it’s very important to the communities to get clean water sources finally after all these years,” said Robinson Yumbo, a resident of the area and plaintiff in the lawsuit, speaking through a translator.

The government, he said, hasn’t been much help.

“In Ecuador, there are great lacks of many government services: health services, water services,” he said. “We’ve been pressuring the government for so many years in so many areas.”

A Chevron spokesman said that while bringing the area’s residents clean water is a worthwhile goal, the ClearWater Project misleads people about the nature of the problem – and the nature of the suit. An Ecuadoran judge fined the company $18 billion last year, but Chevron has vowed not to pay, accusing the judge and the opposing team’s lawyers of fraud and misconduct.

“Any effort to provide a bacteria-free source of water represents progress in a region that’s been neglected by Ecuador’s government,” said Chevron spokesman Kent Robertson. “Unfortunately, the project fails to draw attention to the reality of the situation, instead perpetuating knowingly false information that’s the foundation of a fraudulent lawsuit.”

It isn’t the first time someone has tried to address the area’s water problem. Trudie Styler, wife of pop star Sting, worked with UNICEF in 2008 and 2009 to install rain barrels with water filters in some local communities.

Rea Garvey, an Irish musician popular in Germany, took an interest in the tribes’ situation after meeting Anderson, who used to be the corporate campaign director of an environmental group supporting the Ecuadorans against Chevron. Garvey didn’t want to get involved in the lawsuit, but he did want to help the people on the ground, Anderson said. Garvey provided the project’s initial $70,000 in seed money.

Tribes living in the Ecuadoran Amazon usually draw their drinking water from streams and springs. Sometimes the water looks, tastes and smells clean, Anderson said. Often, however, it has a taste that Anderson – a sometime-San Franciscan and blogger for SFGate.com who now lives in Ecuador – likens to rust. Many of the streams, he said, have oil sheens visible along their banks.

Oil companies have drilled in the area since the 1960s, leaving behind waste pits that contain a mixture of water, petroleum and chemicals. Texaco operated there from 1964 to 1992, and Chevron inherited the lawsuit when it bought Texaco in 2001.

When Texaco pulled out of Ecuador, it reached an agreement with the government to clean up a portion of the area. The rest was left to Petroecuador, which continues to pump oil there.

The rain water tank systems that ClearWater installs collect rainwater sluicing down the corrugated metal roofs common in the region. Gutters channel the water through a series of water filters, then to a large plastic water storage tank. No electricity is required, just gravity.

The project hires locals to do the water tank installation, with 10 employed so far. More importantly, the tribes have set up a committee to teach their members how to maintain and repair the rainwater systems and tanks.

A San Francisco humanitarian organization, Groundwork Opportunities, manages the project’s finances. In addition, two environmental groups involved in the suit against Chevron will help promote the project, and one of them, the Rainforest Action Network, has given ClearWater money.

But Anderson said he wants ClearWater to remain distinct from the lawsuit, which shows no sign of ending.

“I believe the lawsuit and the campaign have raised enough awareness about this, internationally, that there’s enough people in the world who want a meaningful way to support the communities now,” Anderson said.

Hopefully this sad situation will be resolved and the area cleaned-up and rehabilitated; petrochemical contamination in the world’s rain forest not only affects the local inhabitants but it ultimately affects everyone on this planet- the rain forests perform a critical role in balancing and regulating the Earths’s atmosphere.  Rainwater harvesting systems and rain water tanks make sense in the rain forest and anywhere else on the planet- it is an easy way to obtain clean, free water.