What happens when demand for this essential resource starts exceeding supply in many parts of the world? 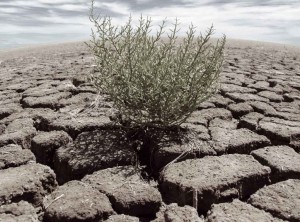 The recent UN alert that drought in the Sahel threatens 15 million lives is a harbinger of things to come.In the next twenty years, global demand for fresh water will vastly outstrip reliable supply in many parts of the world.

Thanks to population growth and agricultural intensification, humanity is drawing more heavily than ever on shared river basins and underground aquifers. Meanwhile, global warming is projected to exacerbate shortages in already water-stressed regions, even as it accelerates the rapid melting of glaciers and snow cover upon which a billion people depend for their ultimate source of water.

This sobering message emerges from the first U.S. Intelligence Community Assessment of Global Water Security. The document predicts that by 2030 humanity’s “annual global water requirements” will exceed “current sustainable water supplies” by forty percent. Absent major policy interventions, water insecurity will generate widespread social and political instability and could even contribute to state failure in regions important to U.S. national security. (Look here for a webcast from the Woodrow Wilson Center of experts and U.S. government officials discussing the findings.)

The simultaneous ubiquity and scarcity of water is one of Earth’s little ironies. Globally, 97.5 percent of H2O is contained in world’s oceans. Of the planet’s “fresh” water (the residual 2.5%), more than two-thirds is encased in ice packs and glaciers, particularly in Antarctica and Greenland, another thirty percent in groundwater, and almost one percent in high latitude permafrost. That leaves us with about 0.4 percent of global fresh water to account for: about two-thirds of that is contained in freshwater lakes, with the rest distributed among soil moisture (12 percent), the atmosphere (9.5 percent), wetlands (8.5 percent), rivers (1.5 percent) and vegetation (1 percent).

The need for reliable sources of fresh water is as old as our species, of course. What is new today is the combustible combination of surging global demand for increasingly scarce fresh water in certain volatile regions of poor governance. Several factors are driving this trend.

Significantly, the intelligence community does not predict that increased competition for water resources will, by itself, be a source of violent conflict–a finding borne out by a rich body of research. And yet the same document warns that water stress may well “contribute to the risk of instability and state failure,” particularly “when combined with poverty, social tensions, environmental degradation, ineffectual leadership, and weak political institutions.” Many of the countries likely to be hardest hit are fragile and/or authoritarian states located within the broad arc of instability encompassing North Africa, the Horn, the Arabian Peninsula, and southwest, central, and south Asia. In other words, states least able to cope.

Regional tensions over shared river basins will also rise. States will use diplomatic and other leverage to preserve their water interests, and “upstream” states will be tempted to use water as a diplomatic weapon, including by threatening to impede flow. Nonstate actors, notably terrorists and other extremists, may also seek to sabotage dams and other infrastructure.

Regional stability and peace, therefore, increasingly depend on effective management of the world’s 263 shared international water basins. “Today, water basin agreements often do not exist or are inadequate.” Analyzing the current capacity to manage seven major water basins, Global Water Security assesses mechanisms to govern the Brahmaputra and Amu Darya to be “inadequate,” and those governing the Tigris-Euphrates, the Nile, and the Mekong as “limited.” (The Indus and the Jordan rivers earn a higher, “moderate” score.)

By revealing the scale and consequences of global water crisis, the intelligence community has performed a great service. But the policy response to date has been just a drop in the bucket.

There are many countries that are already facing a water crisis, including South Africa.  Not only is much of South Africa’s available water supply being polluted by heavy industry, mining and new developments, it is also being consumed by industries and agriculture, making potable freshwater a dwindling resource.  In a water scarce country such as South Africa, we should conserve as much water as possible and embrace rainwater harvesting (rainwater tanks) as well as water recycling such as grey water irrigation.  Water tanks allow for storage of water during droughts or water supply cuts and water tanks can store free rain water.