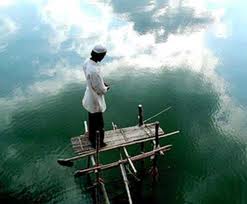 Significance of water in Hinduism and Islam

Water in Hinduism has a special place because it is believed to have spiritually cleansing powers.  To Hindus all water is sacred, especially rivers, and there are seven sacred rivers, namely the Ganges, Yamuna, Godavari, Sarasvati, Narmada, Sindhu and Kaveri.  Although Hinduism encompasses so many different beliefs among those that most Hindus do share is the importance of striving to attain purity and avoiding pollution.  This relates to both physical cleanliness and spiritual well-being.

Pilgrimage is very important to Hindus.  Holy places are usually located on the banks of rivers, coasts, seashores and mountains.  Sites of convergence, between land and river or two, or even

better three, rivers, carry special significance and are specially sacred.  Sacred rivers are thought to be a great equalizer.  In the Ganges the pure are made even more pure and the impure have their pollution removed if only temporarily.  In the sacred water distinctions of caste are supposed to count for nothing, as all sins fall away.  Kumbhamela is a pilgrimage of Hindu devotees and is held every three years at four different places in turn – Hardwar, Nasik, Prayaga and Ujjain.  These places are believed to be where drops of amrta – the nectar of immortality – fell to earth during a heavenly conflict.

The Ganges river is the most important of the sacred rivers.  Its waters are used in puja (worship) and if possible a sip is given to the dying.  It is believed that those who bathe in the Ganges and those who leave some part of themselves (hair, bone etc) on the left bank will attain Svarga (the paradise of Indra).  The river is said to flow from the toe of Vishnu to be spread into the world through the hair of Shiva.

Funeral grounds are always located near a river.  Sometimes at the funeral a small hole is drilled in an earthen pot, which is then filled with water.  As the son of the deceased walks around the burning funeral pyre with the pot, dripping water forms a limiting line to prevent the soul from escaping back into the earth as a ghost.  When the heat of the pyre cracks the skull of the corpse, the mourners bathe in the river and return home.  On the third day after the cremation the ashes are collected and, on or after the tenth day they are cast into a holy river.

For Hindus, morning cleansing with water is a basic obligation.  Tarpana is the point at which the worshipper makes a cup with his hands and pours the water back into the river reciting mantras.

After sipping some water, he may then apply the distinguishing mark of his sampradaya (tradition), and say the morning prayer, samdhya.  Sodhana is Hindu purification and is necessary for different reasons and at different levels.  Physical purification is a part of daily ritual which may, in the case of sadhus (Hindu holy people who renounce the world seeking Brahman), be very elaborate.  Sodhana is also necessary if caste rules have been broken, for example if someone drinks from the same vessel as a member of a lower caste, and before puja.  Every temple has a pond near it and devotees are supposed to take a bath before entering the temple.

The story of the Great Flood of Manu appears in Hindu scriptures.  This is the story of how all creation is submerged in a great deluge but Manu is rescued by a fish that he once saved from being eaten by a larger fish.  The fish told him to build a large boat and to take into it seeds and animals.  The fish then towed the boat to safety by anchoring it on the highest of the Himalayas.  He stayed on the mountain (known as Manu’s Descent) while the flood swept away all living creatures. Manu alone survived.

In Islam water is important for cleansing and purifying.  Muslims must be ritually pure before approaching God in prayer. Some mosques have a courtyard with a pool of clear water in the centre, but in most mosques the ablutions are found outside the walls.  Fountains symbolising purity are also sometimes found in mosques.  In Islam ritual purity (called tahara) is required before carrying out religious duties especially salat (worship).

There are three kinds of ablutions.  Firstly, ghusl, the major ablution, is the washing of the whole body in pure water, after declaring the intention to do so.  Muslims are obliged to perform ghusl after sex which incurs a state of major ritual impurity.  Ghusl is also recommended before the Friday prayer, the two main feasts, and before touching the Koran.  Ghusl must be done for the dead before they are buried.

The second ablution is wudu, the minor ablution, which is performed to remove minor ritual impurity from everyday life.  This must be done before each of the five daily prayers and involves using pure

water to wash the face with pure water, rub the head with water, wash the hands and arms up to the elbows and the feet up to the ankles. This comes from the Koran 5: 7/8 “O you who believe, when you prepare for prayer, wash your faces and your hand to the elbows; rub your head and your feet to the ankles” and is elaborated on in great detail in the Sunna.  Every mosque has running water for wudu.  The third type of ablution is performed when no water is available.  In this case clean sand may be used.

The theme of water for cleansing and purifying runs through so many religions.  It is ironic that the very rivers (such as the Ganges) that are meant for cleansing, spiritually and physically, are used as dumping grounds for human waste.  Taking a sip from the Ganges River could possibly be a life-threatening exercise.  It is difficult to understand how so much religious respect can be given to water but then how irreverently humans treat water outside of their theological beliefs.  Untreated sewage and industrial waste are still being pumped daily into our lakes, rivers and oceans.  As an individual, there are many ways to conserve water and prevent water pollution.  Be mindful of the chemicals that we flush away as they ultimately end up in somebody’s water. Water Rhapsody branches have installed thousands of rainwater harvesting and grey water systems around South Africa, including some for high profile clients.