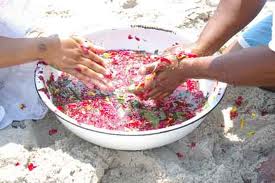 In Judaism ritual washing is intended to restore or maintain a state of ritual purity and its origins can be found in the Torah.  These ablutions can be washing the hands, the hands and the feet, or total immersion which must done in ‘living water’, i.e. the sea, a river, a spring or in a mikveh.  In Temple times ablutions were practised by priests, converts to Judaism as part of the initiation rites and by women on the seventh day after their menstrual period.  Priests had to wash their hands and feet before taking part in Temple services.  The ritual washing of hands is performed before and after meals and on many other occasions.

The story of the Great Flood is told in Genesis 6-8.  God destroyed humanity by sending a great

flood.  Only Noah and his family and a pair of each animal were saved in the ark built by Noah.  Afterwards God promised he would never attempt to destroy the earth again and sent the rainbow as a sign of this covenant.  The story of a Great Flood is also found in other cultures such as the Australian Aborigines and some Pacific Islanders.  The Israelites’ story is different to these because it emphasises the ethical demands of God.  The flood is a divine punishment from which Noah survives because of his moral worthiness.  The Flood washed away all the sins of the world so that we could start afresh.  This is echoed in Christianity by the death and resurrection of Christ that eradicates sin so that nothing will stand in the way of man and God.

at the beginning of the Exodus which enabled the Israelites to escape from the Egyptian army that was chasing them.  God allowed Moses to part the sea so that the Israelites could walk safely to the other side on dry land, while the Egyptians drowned as the sea came together again.  This miracle was a reward for the faith of Moses and the Israelites, God’s Chosen People.  The parting and crossing of the Red Sea shows that God has power over nature, even the mighty oceans.  Water here is powerful, but an instrument of God for punishment (for the Egyptians) and blessing (for the Israelites).

A mikveh is a Jewish ritual bath used for cleansing after contact with a dead body or after menstruation.  It can also be used used for immersing vessels and as part of the initiation ceremony for converts.  Only water that has not previously been drawn into a container can be used, and there must be no leakages.  The mikveh has its origins in Ancient times when people had to be purified in a mikveh before they could enter the Temple area.  Water in this case is important for its cleansing properties.

Shinto is Japan’s indigenous religion and is based on the veneration of the kami – the innumerable deities believed to inhabit mountains, trees, rocks, springs and other natural phenomenon.  Worship of kamis, whether public or private, always begins with the all important act of purification with water.  Inside the many sacred shrines troughs for ritual washing are placed.  Waterfalls are held sacred and standing under them is believed to purify.  Waterfalls are also used in suigyo (water austerities).

The significance of water in Zoroastrianism is a combination of its purifying properties and its importance as a fundamental life element.  Therefore, while water is used in purification rites and rituals it is sacred itself and so must be kept from being polluted.

Zoroastrianism is a very dualistic creed with a great emphasis placed on the opposing forces of good and evil.  When the world was created the Evil Spirit Angra Mainyu attacked the earth and among other things made pure water salty.  Zoroastrians believe that pollution is evil and that water, when pure, is sacred.  Zoroastrians themselves must avoid pollution of any kind and must perform ritual ablutions before saying their prayers (which are said 5 times a day facing a source of light) and before any religious ceremonies such as weddings.

Purity and pollution are central concerns in Zoroastrian thought and practice.  For minor pollutions, padyab-kusti is performed, which involves washing and saying special prayers (kusti).  On special occasions such as weddings or initiations, nahn is performed which combines padyab-kusti with the symbolic eating of a pomegranate leaf and the drinking of nirang (ritual cow’s urine) for spiritual cleansing.  This is followed by the prayer of repentance, the Patet, and finally a bath.  Serious pollution, for example contact with a corpse, requires the nine day baresnum ceremony which is held in the temple precincts and includes periods of prayer and washing with the aid of priests.

The sanctity of water is very important to Zoroastrians.  People must not urinate, spit or wash one’s hands in a river or allow anyone else to.  In Zoroastrianism the dead are not cremated, buried or immersed in water because fire, earth and water must be kept pure.  Thus, corpses are left to birds of prey.

Zoroastrians believe in 6 benevolent divine beings known as Amesha Spentas, which with God’s Holy Spirit, Spenta Mainyu are linked with God’s (Ahura Mazda’s) creation, certain priestly rituals, observances by laypeople and the seven holy days of obligation.  The Amesha Spentas are believed to dwell within each of their creations while at the same time remaining aspects of God’s nature.  Each Amesha Spenta protects its creation and represents an aspect of Ahura Mazda and a feature of the good creation.  These creations are the means by which worshippers can approach Ahura Mazda and by which Ahura Mazda can approach his worshippers.  Haurvatat (meaning wholeness, health and integrity) is a feminine being and the creator of water and is represented by consecrated water used in priestly acts of worship.  The holy day of Haurvatat and water is in midsummer and people pray and make offerings by the seashore or any natural water.  In everyday life Haurvatat is observed by keeping water unpolluted and being temperate and self-disciplined.  Haurvatat is the personification of what salvation means to the individual.

Zoroastrianism also has a Great Flood story.  Ahura Mazda warned Yima that destruction in the form of floods, subsequent to the melting of the snow, was threatening the sinful world and gave him instructions for building a vara in which specimens of small and large cattle, humans, dogs, birds, fires, plants and foods were to be deposited in pairs.

Water is integral to human health and spirituality; it has been from the beginning of time.  The sages, religious leaders and other eminent people from ancient times, through various mediums, undertook to ensure that we look after this precious resource. The importance of water conservation in our overpopulated world has never been greater.  We should all be doing something about it.  Water Rhapsody Mpumalanga/Limpopo has a number of solutions, ranging from a simple water-saving toilet flush mechanism to rooftop rainwater harvesting systems.  If catching rain in rainwater tanks is not practical for you, a grey water recycling system may be the right solution.  Have a look at our product demo page and please contact us for further information.  Water Rhapsody branches are located throughout South Africa. 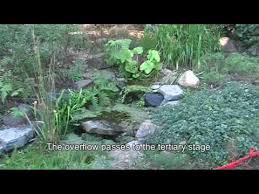