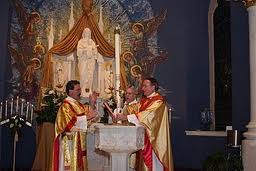 Water has a central place in the practices and beliefs of many religions for two main reasons.  Firstly, water cleanses.  Water washes away impurities and pollutants, it can make an object look as good as new and wipe away any signs of previous defilement.

Water not only purifies objects for ritual use, but can make a person clean, externally or spiritually, ready to come into the presence of his/her focus of worship.  Secondly, water is a primary building block of life.  Without water there is no life, yet water has the power to destroy as well as to create.  We are at the mercy of water just as we are at the mercy of our God or gods.  The significance of water manifests itself differently in different religions and beliefs but it is these two qualities of water that underlie its place in our cultures and faiths.

Water is fundamental in the rites, language and symbolism of all religions, and the Bahá’í Faith is no exception. There are Bahá’í laws concerning water and cleanliness, and many ways that water is used as a metaphor for spiritual truths. This brief summary of the Bahá’í perspective on water is based as far as possible on direct quotations from the Bahá’í Writings.

In a more general context, the Bahá’í Faith places great importance on agriculture and the preservation of the ecological balance of the world. Water is of course a fundamental resource for agriculture. It is essential to the functioning of all ecological communities and plays a key role in all the life support systems of the planet. It is essential to life itself, which is why it is so often used in spiritual symbolism.

Water is an important medium for linking us with the environment in the complex interactions that are such an important feature of our integrated planetary system.

For Bahá’ís, respect for the creation in all its beauty and diversity is important, and water is a key element of that creation.

“The Almighty Lord is the provider of water, and its maker, and hath decreed that it be used to quench man’s thirst, but its use is dependent upon His Will. If it should not be in conformity with His Will, man is afflicted with a thirst which the oceans cannot quench.” (`Abdu’l-Bahá, in Prayer, Meditation, and the Devotional Attitude (compilation), pages 231-232)

The wise management of all the natural resources of the planet, including water, will require a global approach, since water is not a respecter of national boundaries. The use, sharing, protection and management of water need to be governed by spiritual principles of justice and equity, and the fundamental concept of moderation. Decisions on water need to be taken through processes of consultation involving all those concerned or affected.

For Buddhists symbolism and ritual is pointless because they seek spiritual enlightenment that comes from seeing the reality of unreality.  Bodhidharma, thought to be the first teacher of Zen Buddhism said this in the 5th Century CE:

“This mind is the Buddha.  I don’t talk about precepts, devotions or ascetic practices such as immersing yourself in water and fire, treading a wheel of knives, eating one meal a day, or never lying down.  These are fanatical, provisional teachings.  Once you recognise your moving, miraculously aware nature, yours is the mind of all buddhas.“

Water does however feature in Buddhist funerals where water is poured into a bowl placed before the monks and the dead body.  As it fills and pours over the edge, the monks recite  “As the rains fill the rivers and overflow into the ocean, so likewise may what is given here reach the departed.”

Almost all Christian churches or sects have an initiation ritual involving the use of water.  Baptism has its origins in the symbolism of the Israelites being led  by Moses out of slavery in Egypt through the Red Sea and from the baptism of Jesus by John the Baptist in the Jordan.  After Jesus’ resurrection he commanded his disciples to baptise in the name of the Father, Son, and Holy Spirit (Matthew 28:19-20).  Baptism is regarded differently in different denominations within Christendom.  Baptism is a symbol of liberation from the oppression of sin that separates us from God.  Except for within the Catholic Church, it is believed that baptism does not in itself cleanse one from sin, but is rather a public

declaration of a person’s belief and faith in Christ and it is a sign of welcome into the Church. The Catholic Church, however, believes that a real change occurs at baptism – it is more than just symbolism – it is at baptism that Catholics believe that the stain of original sin is actually removed from the individual. The use of water is important for its own symbolic value in three ways: it cleanses and washes away dirt, fills everything it enters as God fills those who are immersed in Him and we need water to survive physically as we need God to survive spiritually.  In the early church baptism was usually performed with the person standing in water and with water being poured over the upper part of the body.  This was called ‘immersion’ but today the term refers to the method of dipping the whole body under water which is used, for example, by the Baptist and Orthodox churches.  In most Western churches today the rite is performed by pouring water over the head three times (affusion) and sometimes sprinkling water over the head (aspersion).

Another important significance of water for Christianity is the “living water” that Jesus described himself as.  John 4: 1-42 is the story of Jesus and a Samaritan woman to whom he offers living water so that she will never thirst again, in other words eternal life through him.

Easter Vigil for baptism of catechumens.  The use of water other than for baptism goes back to the 4th century in the East and the 5th century in the West.  The custom of sprinkling people with water at mass began in the 9th century.  At this time ‘stoups’, basins for holy water from which people could sprinkle themselves on entering a church, were in common use.  Holy water is also used at blessings, dedications, exorcisms and burials.

Ablutions in Christianity are mainly baptism and the washing of fingers and communion vessels after the communion.  This takes place in two parts.  Firstly the chalice is rinsed with the wine, and then the chalice and priests’ fingers with wine and water.  This ablution is important because after the bread and wine has been consecrated, Christ is believed to be present. 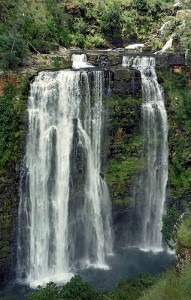 Water is the basis for so many things on planet earth and it is therefore not surprising that it features with so much reverence in our religions and belief systems.  It is interesting that many rituals and beliefs stem from practi cal necessity but their meanings have been forgotten over time.  Water is a cleanser, a symbol of purity and life.  A pristine mountain stream cascading over rapids and waterfalls is one of nature’s wonders and a spiritual experience for many.  Water from various natural sources can have real healing properties; minerals and natural substances leached from the earth carry many medicinal properties.  An interesting ancient ritual is that of Easter Water; spring water is collected on Easter Sunday – it is supposed to have extra beneficial healing effects because of the timing of the full moon, the equinox, the new beginnings and fertility associated with Easter.  Unfortunately, our water is often contaminated by our own doing and used wastefully without thought.    No matter what religious beliefs you may have, there is no denying that without water we cannot live; water is life!

Water Rhapsody Conservation Systems can help you save water and live sustainably.  Find out more about the owners of Water Rhapsody Mpumalanga.

Water Rhapsody specializes in water conservation systems that include rainwater harvesting systems , rainwater tanks and gray water recycling systems (see the benefits of Water Rhapsody’s systems).  Our water systems can be adapted to small households or to large office blocks, hotels and schools. Should you have questions about our water systems, see rainwater FAQ and grey water FAQ. Our merge with Yes Solar Mpumalanga enables us to offer high quality, German-made Solsquare solar water heating systems (why buy a solar water heater?).  Yes Solar is an official Solsquare distributor in Mpumalanga (White River / Nelspruit areas).  Solar energy is a great renewable energy source for sunny South Africa.  Solsquare solar water geysers are Eskom- and SABS-approved and and are installed by qualified solar installers (our solar water heaters are eligible for substantial Eskom solar geyser rebates).  Contact us for a free quote on a solar geyser, water system or JoJo water tank or water tank stand (we are authorized dealers for JoJo Tanks in South Africa and also supply high quality Atlas Plastics water tanks to the Mpumalanga and Limpopo Lowveld).