Clean and plentiful water provides the foundation for the prosperity of any community for it to survive. Water supply issues should not be a problem for Zimbabwe since we share the Zambezi, Pungwe, Save and Limpopo water basins with neighbouring countries Mozambique, Zambia, Botswana and South Africa. 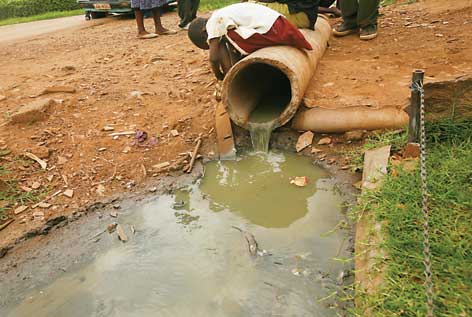 However, mere access to water is not sufficient as the lack of potable water poses huge challenges for Zimbabwe.

Polluted water is now the country’s biggest health risk as most of our water resources lack basic protection rendering them vulnerable to pollution from industrial plants and raw sewage.

The current water crisis, among other things, is emblematic of Zanu PF’s failure to govern. Three decades of Zanu PF rule have been characterised by neglect for the country’s basic infrastructure.

Never mind the comatose economy, rampant electricity shortages, potholed roads and uncollected garbage, clean water is the most basic of needs and government has failed to provide that to its citizens, and there are no indications it will do so anytime soon.

Disposal of sewage and waste water poses a major threat.

The treatment capabilities for sewage and waste water remain below expectations in Zimbabwe, especially in Harare. Large amounts of sewage-polluted untreated water are discharged into the city’s water sources every day.

Harare is built on a watershed but ironically the city’s residents have gone for years struggling with water shortages.

Some Mabvuku residents went for more than six years without a drop of water from their taps while parts of Borrowdale close to Hatcliffe have been dry for about 10 years now.

Those lucky enough to get running water are not safe either as the water is so contaminated that it is not uncommon for residents to turn on their taps only to collect a brownish, greenish or yellowish liquid.

It is estimated roughly 80% of raw sewage is discharged into Harare’s water sources. No wonder the city’s residents continue to endure primitive waterborne diseases like cholera, dysentery and typhoid.

If residents in the capital, the seat of government where most of our rulers reside, literally drink purified urine, what are those in smaller towns drinking?

The Ministry of Water Resources says the condition of national water infrastructure has deteriorated rapidly and operating capacity is currently under 40%. But how did we get to this tragic stage?

There has been no long-term planning for provision of clean water, or other basic services for that matter; it is hard to recall the last time government invested in water supply and other essentials.

Plans to draw water from the Zambezi River to supply Bulawayo and intentions to build Kunzwi Dam to provide Harare remain a pie in the sky.

Industries have shut down in Bulawayo as a result of water shortages. Businesses and homes in Harare continue to suffer without water. How does government intend to attract investment when it cannot even guarantee adequate water supplies?

Water scarcity is compounded by poor governance and ineffectual, corrupt political leaders.  The eastern part of Zimbabwe enjoys relatively high rainfall and is rich in water resources.  Unfortunately, Zimbabwe is not the only country in Africa suffering from appalling mis-rule however, as people eventually realise that they have the power to put better leaders in charge of their nations, hopefully water infrastructure will be repaired and upgraded.  In a situation where municipalities cannot supply safe drinking water, rainwater harvesting and rainwater tanks will improve lives and lead to less dependence on failing governments for water.  Water tanks should be chosen with care; the most popular type of water tank for households and businesses are water tanks made from polyethylene or ‘plastic’ water tanks.  We recommend JoJo Tanks water tanks as they are made with a US-FDA approved, food-grade lining and are manufactured to withstand Africa’s harsh conditions.  Click on the links below to view the various JoJo water tanks, JoJo rainwater tanks, JoJo tank stands and other JoJo products available in South Africa.