An innovative project expected to provide safe drinking water annually to 4.5 million people in western Kenya has been feted at the ongoing climate change talks in Doha, Qatar. 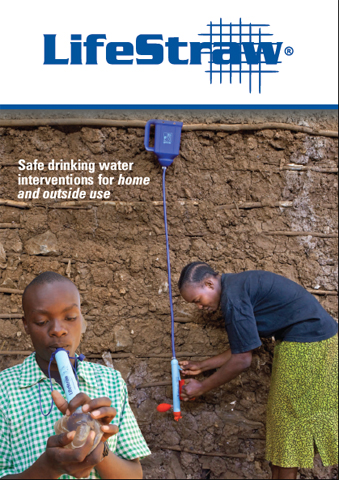 The LifeStraw Carbon for Water in Kenya, undertaken by Vestergaard Frandsen, was showcased and honoured at an event attended by UN Secretary General Ban Ki Moon and the top UN climate change official Christina Figueres.

Also honoured were eight others projects from other developing countries selected as the winners of the 2012 Momentum for Change ‘lighthouse activities’ that are either helping to curb greenhouse gas emissions or assisting people adapt to climate change.

“These stories of nine excellent activities should inspire and encourage all of us. These ideas, their contribution, may be modest. They may not be modern technology, but small, creative ideas can help deal with climate change,” said Mr Ban.

“Real action is taking place on the ground, and these initiatives deserve to be scaled-up and replicated at an increasing pace. I call on governments to make the difficult compromises in the climate negotiations, and take the necessary steps to address climate change at home.”

The Momentum for Change initiative, launched last year in Durban, South Africa, is funded by the Bill and Melinda Gates Foundation.

On Tuesday, Mr Ban said even though climate change does not affect all equally, there was a need for nations to move quickly towards a low-emissions pathway to minimise climate risks and build the future we want.

The LifeStraw is an easy to set up and maintain water purification system that uses no fuel, meaning those who receive the filter no longer need to treat water by boiling it using wood fuel – a traditional necessity that releases greenhouse gasses.

Studies indicate that the LifeStraw products remove at least 99.9 per cent of all bacteria, viruses and parasites. It also removes dirt from water.

Each family filter can purify at least 18,000 litres of water – enough to supply a family of five for three years.

Dr Willis Akhwale, the Ministry of Health’s head of disease prevention and control said the project will help the region reduce cases of diarrhoea.

“Diarrhoea is a major cause of deaths amongst children in the area. But the project is expected to provide safe drinking water which will go a long way in controlling the disease while at the same time saving the environment,” said Dr Akhwale, moments after receiving the award.

According to a brief by Vestergaard Frandsen, carbon emission reductions were reported at 1.4 million tons after the first six months of its launch in the country in 2011.

Annually, the activity is expected to reduce an estimated 2.7 million tons of carbon emissions.

According to Vestergaard Frandsen , a new field study in Zambia assessed the impact of water filtration and safe storage in households with HIV positive mothers.  Households were randomly assigned to intervention and control groups and followed for one year to assess filter use, drinking water quality and diarrheal disease.  Results, published in PLOS ONE, found that this intervention resulted in a 53 percent reduction of diarrhea among children under two years and a 54 percent reduction among all household members. The LifeStraw® Family water filter was used in the study.  LifeStraw® technology has received numerous awards.  The LifeStraw® Family filter meets the highest WHO and US EPA standards for microbiological performance and delivers at least 18,000 liters of safe drinking water, enough to supply a family of five with safe drinking water for three years or more.  In South Africa, the Life Straw Family costs about ZAR 400 equal to about ZAR 27 per person per year or ZAR 23  per 1,000 liter water.

LifeStraw Personal (can filter up to 1000 litres) is also available in South Africa; we are LifeStraw suppliers; please contact us for more information and prices (please note that minimum quantities apply).