USA: Another drought in Texas looming?

Water managers are eyeing their gauges, farmers are watching wheat fields wither, ranchers are recalculating their herd numbers and city dwellers are dragging out their sprinklers again as drought rapidly intensifies across Texas. 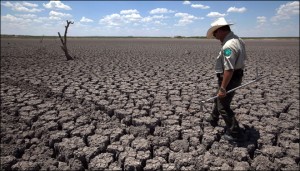 Ninety-four percent of Texas is now abnormally dry, 54 percent is stuck in severe drought and 25 percent is mired in the extreme category, up 10 percent from one week ago, according to the U.S. Drought Monitor released Thursday.

For now, one year after a record Texas drought caused $7.62 billion in agricultural losses, 6 million acres of winter wheat are the biggest concern. Forty to 45 percent of the crop is rated poor to very poor, a 15-point jump from last week, the U.S. Drought Monitor reported.

“Drought is rearing its ugly head again. Things are not too shiny around the state. The wheat crop is beginning to pucker up pretty good,” said Travis Miller, a drought expert for the Texas A&M AgriLife Extension Service.

In what should be a green field of wheat in the ranchlands 15 miles north of Mineral Wells, Darrell Francis kicks bone-dry bare dirt and fingers a stunted clump of wheat, which has barely rooted two months after it was planted.

“If it weren’t for the dew it would all be gone. We’re just sitting here waiting and hoping it’s going to rain,” the 71-year-old rancher said as he surveyed hundreds of acres of sparse wheat fields that are dotted with dried up or depleted stock tanks and bordered by parched pastures of native grasses.

And that’s after battling a plague of grasshoppers this summer.

“There’s not much to eat out there. I remember the drought in the 1950s and I think we are in the same situation,” said Francis, whose boot-level view mirrors the pessimistic assessment of Texas state climatologist John Nielsen Gammon.

“I say we are in year three of a drought now and the short-range forecast is not promising. There’s nothing out there that will distinguish this from the drought of record in the 1950s which lasted six or seven years,” Nielsen Gammon said.

“It’s grim, it looks like Texas is going to have between the second- to fourth-driest October-November period on record,” he said. “We’re ahead of the drought pace from two years ago.”

The state is quickly catching up with this year’s dire conditions in the High Plains, where 86 percent of the region is mired in severe drought and 27 percent is in exceptional drought, the most severe category.

Nationally, 76 percent of the contiguous United States is abnormally dry.

A wet winter and spring eased a critical water crisis in Texas but since April the spigot has been turned off.

Water supply reservoirs in the state have dipped from 76 percent full six months ago to 64 percent on Thursday, according to the Texas Water Development Board. One year ago, the reservoirs were 59 percent full.

In North Texas, Eagle Mountain Lake and Lake Bridgeport are lower than they were a year ago, said David Marshall, engineering services director for the Tarrant Regional Water District. Lake Bridgeport is 14.7 feet below capacity.

“It’s always feast or famine for the West Fork reservoirs and right now it’s famine,” he said, noting that overall the district’s reservoirs are at 79 percent capacity, compared with 68 percent a year ago.

What’s made the difference, he said, is that last year’s twice-a-week watering restrictions have become a habit for many homeowners.

The restrictions have been lifted but usage remains 93 percent of average, Marshall said.

“It’s powder dry out there. Soil moisture is really low and it’s going to take a lot of rain to get a runoff. We’re bracing to increase our pumping from East Texas this winter to restore our levels,” he said.

The short-term outlook for rain is bleak, said Dan Huckabee a climate specialist for the National Weather Service in Fort Worth, who notes that a mere half-inch in mid-October is the only significant rain in the Dallas-Fort Worth region since September.

The 0.05 inch of rain recorded in November is the fifth-driest on record.

The rainfall deficit for April through November in DFW is pushing 10 inches, Huckabee said. In portions of Denton County, the deficit is as much as 16 inches over the last six months.

“The real concern is that we are still carrying a pretty good level of drought. It doesn’t seem like there is anything on the horizon that is going to help that,” he said “The neutral forecast for El Nino puts some uncertainty into what to expect.”

“A lot of cows still have wheels under them. I don’t think a significant portion have moved back to Texas. We don’t have the capacity to increase our herd until Mother Nature heals the land,” he said.

The mammoth Four Sixes Ranch headquartered in Guthrie trucked more than 75 percent of its herd out of state last year and doesn’t plan on hauling them back anytime soon, said general manager Joe Leathers.

“We’ve recovered a little but we’re going to see if this weather changes before we bring them back,” he said.

Francis, who reduced his herd from 400 to 300 last year, says he’ll have to make some tough decisions early next year if the rains don’t come.

Droughts, whether due to man-influenced climate change or due to natural cycles, seem to be increasing in frequency and intensity worldwide.  As our population sky-rockets, especially in developing countries, the effects of drought on international food security are dire.  Water conservation measures need to be implemented wherever possible.  Above-average rainfall is also being recorded in some areas where this phenomenon alternates with droughts.  Rainwater harvesting water tanks during good seasons could help many to get through the dry periods.