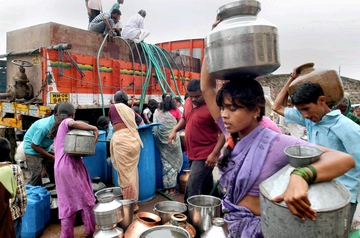 It is a familiar scene during summers in many urban areas. A municipal water tanker trundles into a neighbourhood, which has not received water in its taps for days. A mass of people promptly converge on it carrying buckets, pitchers, drums – anything that can carry water. While the rest queue up, amid much jostling, a few athletic types clamber on to the top of the tanker and send water down using rubber pipes.

It happens because there is just not enough water available for India’s 1.2 billion and growing population. An Organisation for Economic Co-operation and Development (OECD) report titled Environmental Outlook to 2030 says 63 per cent of the population in Brazil, Russia, India and China are living under medium to severe water stress, which will increase to 80 per cent by 2030. Already, India’s per capita water availability has shrunk from 1,816 cubic metres in 2001 to 1,545 cubic metres in 2011, according to the latest census.

But the situation can be turned around. “At present, water is being wasted or mismanaged,” says A.R. Shivakumar, 52, senior scientist at the Karnataka State Council of Science and Technology (KSCST), a Bangalore based government body. A vociferous proponent of rainwater harvesting – capturing, purifying and storing rainwater in large water tanks – he has invented tools that simplify the process and has even got local authorities to make rainwater harvesting compulsory in the heart of Bangalore.

Shivakumar started with his own house, which he built in 1995. The rainwater harvesting apparatus collects more than 200,000 litres of rainwater a year in three storage tanks, that hold a total capacity of 45,000 litres.

Naturally, he collects most of the water during the rainy season – May to October. But it is enough to sustain his family’s needs – including potable water – even during the dry season. Indeed, he has not taken any external water connection at all.
As opposed to the usual sandbed filter, Shivakumar has devised and patented a PopUp filter that can be vertically installed on the wall of a small building to remove impurities before rainwater is collected. For buildings that are bigger, he developed a ‘First Flush Lock and Diverter’ which does the same.
If the water tank collecting rainwater overflows, the excess water is discharged into the ground through a barrel system, another Shivakumar invention, which has even been named after him. The system is now being propagated in Africa, as well as in some developed countries, by the Norwegian government, which had a joint project with India on environment conservation.
Since 2002, Shivakumar has designed and executed hundreds of rainwater harvesting projects in Bangalore, including at the landmark Vidhana Soudha, the Karnataka High Court and office buildings of private companies such as Intel India and Arvind Mills.
The main source of potable water for Bangalore is the river Cauvery, which is available at best for two to three hours a day. Rainfall, about 97 cm a year, is higher than in other landlocked areas such as Delhi but lower than in coastal towns. With the city’s population swelling, ground water levels have shrunk. “A couple of decades ago, water was available at 10 to 15 feet below the ground,” says Shivakumar. “A few years ago, most of these wells went dry and new borewells failed as water was not available even at 800 feet in some places.”
At Shivakumar’s persuasion, in 2009, the Karnataka government passed an amendment to the Bangalore Water Supply and Sewerage Board (BWSSB) Act. The amended Act made rainwater harvesting compulsory for home and offices with an area of more than 2,400 sq. ft. in the heart of Bangalore. So far, of the 60,000 buildings there with BWSSB water connections, more than 43,000 have adopted harvesting techniques. “Our housing society with 95 units has now completely stopped buying water from private players,” says Suraj Raheja, a resident of a housing society on Ali Askar Road, Bangalore.
A few states such as Delhi, Andhra Pradesh and Tamil Nadu had brought in rainwater harvesting legislation even before Karnataka, and a number of others have since also done so, either across the entire state, or in select cities. “All states should go in for such mandatory legislations. Only then can we beat the scarcity,” says Shivakumar.
Sebastian P.T.