The World Bank on Tuesday approved a $6.4 million grant to improve water and sewage services in the Gaza Strip in the wake of an eight-day firefight between Israel and the territory’s Hamas rulers. 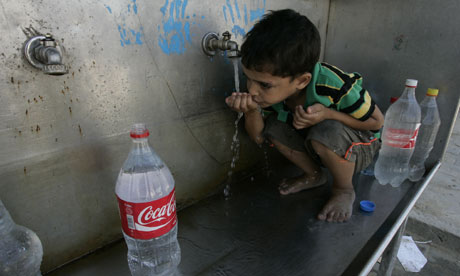 The infrastructure in the impoverished Palestinian enclave — with a population of more than 1.5 million people — has been deteriorating in recent years and the area is now “choked with untreated sewage,” the Bank said.

“We are concerned about the lack of clean water supply and the deterioration in the quality of water resources in the Gaza Strip,” Mariam Sherman, World Bank Country Director for the West Bank and Gaza, said in a statement.

“The new project is very important to Gaza citizens. Not only will it increase the sustainability of water and sewage networks, but it will also allow the utility to better serve the needs of their customers.”

The latest project will fund the construction of water tanks, the connection of major wells to the supply grid and the reduction of costly leaks.

It will also be aimed at helping the local utility to enhance billing and customer services, the Bank said.

The World Bank will be partnering with the Islamic Development Bank, which is making a parallel contribution of $11.14 million.

Israel and the Islamist Hamas movement ruling Gaza waged an eight-day firefight earlier this month in which at least 166 Palestinians, mostly civilians, and six Israelis, including four civilians, were killed.

The conflict, which saw Israel launch a wave of air strikes as Gaza militants fired volleys of rockets, threatened to erupt into a full-scale ground war before a US and Egyptian brokered ceasefire took effect last week.

In times of war and conflict, basic necessities such as water supply are often disrupted or completely halted for indeterminate periods of time.  The same can happen when natural disasters strike. Poor municipal management and corruption can also have the same effect, as has been happening in many of South Africa’s smaller towns and in townships.  This is where the installation of a rain water tank for collecting rainwater becomes invaluable.  Depending on the roof surface area and local rainfall patterns, sometimes enough rain water can be collected and stored in water tanks to supply all the water requirements.  Rainwater harvesting saves on water bills (or reduces them to zero) and ensures peace of mind for emergencies and water supply cuts.  Click on the links below to find your ideal JoJo water tank, JoJo rainwater tank, JoJo tank stand, JoJo septic tank or other high quality JoJo Tanks product.