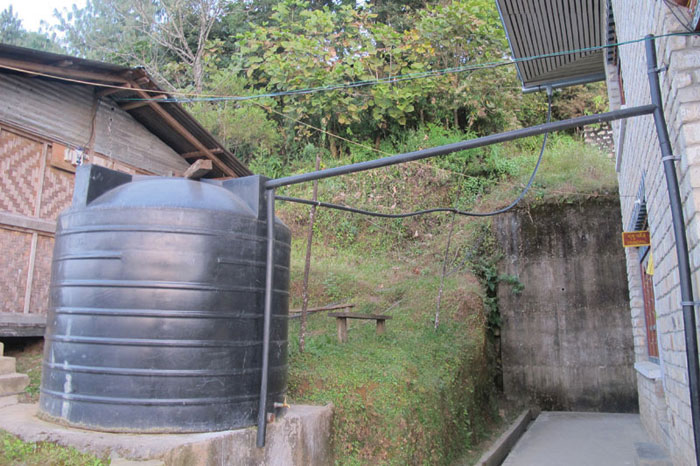 Goenpasingma Lower Secondary School : Eight years ago, day-scholar students of Goenpasingma lower secondary school in Pemagatshel did not just carry books while going to school in the morning; they also each carried five litres of drinking water.

The water was for the school kitchen, which prepared meals for boarding students, and served lunch for day-scholar students.  Located 20km from Pemagatshel town Goenpasingma LSS in Zobel gewog just did not have the required supply of water the school needed.

In 2006, when the new principal took over, he replaced the GI (galvanised iron) pipes with the bigger HD (high density) pipes, and changed its alignment.  Despite that, water flowing from the natural source was not enough.

Two years later, the school informed the public health engineering division (PHED), ministry of health, about the problem and got Nu 500,000 for water supply from UNICEF.

With budget left over, after changing all pipelines to the water intake below the earlier source, about 5km away, the school also initiated harvesting rainwater.

“Rainwater collected in these water tanks is used by students for washing and bathing, whereas cooking and drinking is managed from water from the spring source,” the principal said. “Ever since we harvested rainwater, we’ve not faced an acute water shortage.”

Goenpasingma LSS today has 220 boarders of a total of 372 students.

To prevent water contamination during monsoon, when there is heavy rain, old water from the water tanks is drained and fresh water collected. “It’s quite difficult to manage, but rainwater harvesting is of immense benefit to schools facing a shortage,” a teacher, Kelzang Jigme, said.

However, during dry season, when there is no rainwater and water from the spring source is not enough, boarding students are sent two kilometres away to fetch water.  For washing and bathing, on weekends, girls and boys are sent to a nearby stream turn-wise.

“When I first joined this school, I remember waking up at midnight and going to fetch water,” principal Suren Pradhan said.

Schools are actually ideal for rainwater harvesting and rainwater tanks as, by their nature, the buildings are generally big and there is a large amount of roof surface area available for collecting rain water.