South Africa: Can the legal fight for clean water be won? 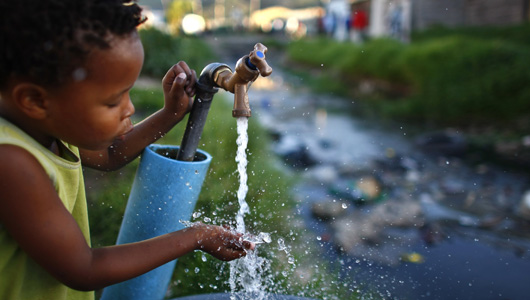 The government, not always obviously, and concerned environmentalists – who are increasingly resorting to courts in the face of a bureaucratic laissez-faire attitude to a clean environment – are directing their energies at keeping SA’s water clean, but whether they are fighting a losing battle given poor attention to essential maintenance is the big question.

Last week, the North Gauteng High Court dismissed an appeal by two Mpumalanga municipalities that were ordered to supply their residents with clean water, says a report on the IoL site. The Gert Sibande and Chief Albert Luthuli municipalities in Carolina were taken to court last month by residents, claiming the water provided to them was not suitable for human consumption. Residents complained that their water had been polluted since January, allegedly by coal mines in the area. Judge Moses Mavundla ordered the municipalities to provide each person with a minimum of 25 litres of drinkable water per day. Mavundla’s ruling still stands, the report notes.

Mavundla’s decision was welcomed by the DA, notes a report in The Times. The party’s Chief Whip in Mpumalanga James Masango said it was evident the municipalities did not intend to abide by the court order issued in July. ‘The fact that both municipalities had the audacity to appeal and to apply for relief while the appeal process is ongoing, shows that they did not intend to abide by the court’s order from the outset,’ he said. ‘They instead chose to waste more taxpayers’ money, which could have been used to deliver water in the first place, by applying for relief and having costs awarded against them,’ Masango is quoted as saying. He said the DA hoped the thwarted court bid would serve as a valuable lesson to the two municipalities, to deliver on their constitutional mandate.

The government is tackling acid mine drainage (AMD), too, on a short and a long term basis. A report in The Star notes that the R18m feasibility study for a long-term solution to address AMD associated with the East, Central and West Rand underground mining basins in Gauteng got under way at the start of the year and will have to be finished by February. It will investigate several options possibly to treat the water to industrial or drinking quality and curb the rising salinity of the Vaal River. Meanwhile, the Trans-Caledon Tunnel Authority is leading the government’s short-term solution, which entails pumping and partially treating the AMD by neutralising the heavy metals. But it does not eliminate the high salt load content of AMD and will discharge 800 tons of salts a day into the Vaal from the Central and Eastern Basins. ‘You’ve got a strange situation now where the master plan is not in place but you’re keeping up with this short-term intervention. We sit with an emergency that we have to deal with and we have no other choice but to start pumping and do the best we can,’ says Jurgo van Wyk, the Department of Water Affairs scientist leading the government’s long-term project to deal with Acid Mine Drainage in the Witwatersrand.

Meanwhile, experts say that SA must improve its water infrastructure maintenance. SA’s backlogs in electricity infrastructure maintenance of R33bn, and water infrastructure maintenance of R2.66bn annually, threaten the economy and social stability. According to a Business Day report, the backlogs can be attributed, in part, to the government’s bid to correct apartheid-era inequalities, which has meant a focus on building new infrastructure at the expense of maintaining existing infrastructure. The SA Institution of Civil Engineering’s 2011 Infrastructure Report Card warns of a ‘culture of complacency’, pointing to ‘substantial maintenance non-compliance’ across SA. ‘It disheartens me. We say over and over again that maintenance is crucial and it doesn’t get done,’ says civil engineer Kevin Wall, of the Council for Scientific and Industrial Research, leader of the team that produces the report cards. The Blue Drop report highlights in red those water jurisdictions where the water is not safe to drink. This year’s report ‘red-tags’ 22. The SA Local Government Association is aware of the maintenance problems and wants an ‘infrastructure refurbishment fund’ to help it leverage private-sector investment. Maintenance could also help solve what is arguably SA’s toughest problem — creating jobs for millions of unskilled citizens. SA’s unemployment rate hovers around 25%, and many without work do not have skills, the report quotes Wall as saying.

In general, the courts and South African legal system have been quite consistent when it comes to water issues – the judgements issued usually order the municipalities (or other state organs) to rectify the problem.  However, it seems that municipalities do not take these judgements seriously and seldom comply in time.  There seems to be no penalty for ensure that municipalities are compliant.  South Africa’s water scarcity issues must also be tackled by individuals and private enterprises.  Water conservation systems such as rainwater harvesting and rainwater tanks can be implemented privately relatively cheaply.  Water tanks are also useful for storing municipal water for times of water supply cuts.  JoJo Tanks manufacture a huge range of plastic tanks and other products; click on the links below for more information.