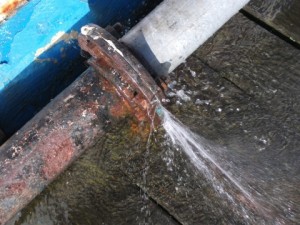 South Africa’s dwindling supplies of clean water are steadily going down the drain because of poor policing, theft, pollution, neglect and wasteful use.

Government statistics released by Water Affairs Minister Edna Molewa show that more than 50 percent of purified pipe water supplies go to waste in most KwaZulu-Natal municipalities, largely from burst pipes and leakages, thefts or other unauthorised use.

Although the percentage of non-revenue water in eThekwini is considerably lower at 36.8 percent, the Durban area nevertheless accounts for the largest waste by volume (9 million kilolitres a month).

Adding to the problem is the shortage of dedicated government inspectors to police and prosecute offenders who steal, pollute or waste untreated water supplies in rivers, dams and lakes.

The Blue Scorpions, the special government unit set up to protect our scarce water resources, is woefully understaffed and did not lay a single criminal charge against water thieves and polluters last year, according to a new report by the Centre for Environmental Rights.

Many irrigation farmers, large companies and municipalities also found it cheaper to risk a small fine than to comply with water laws in a country ranked as the 30th driest nation in the world.

The report, “Stop Treading Water”, says there are between 14 and 21 specialist members of the Blue Scorpions dealing full-time with a wide variety of water law violations.

Last year, the Blue Scorpions were asked to investigate more than 100 alleged violations by farmers, mining companies, industries and municipalities, but did not lay any criminal charges between April and December 2011.

By contrast, the Green Scorpions special environmental management inspectorate has 1 076 inspectors and opened 738 criminal dockets in 2010/2011.

Centre for Environmental Rights director Melissa Fourie, a lawyer who used to be in charge of the Green Scorpions, said the government needed to intervene urgently to appoint a senior “water champion” and make the Blue Scorpions a force to be reckoned with.

It should also jack up criminal penalties for water law offenders and roll out a more visible campaign to discourage illegal water use and pollution.

Rather than relying solely on prosecuting offenders in court, it should consider introducing a new system of hefty administrative fines.

Fourie said there was a trend in industrialised nations away from criminal prosecution and towards civil and administrative penalties which had improved compliance considerably.

The National Business Initiative also warned recently that many top SA companies were “not sufficiently aware” about water scarcity.

Chief executive Joanne Ya-witch said the results of the first voluntary Water Disclosure Report raised serious questions on whether major companies were aware of the full value and importance of clean and abundant water to the future of their business.

Less than 70 percent of companies had long-term water management policies in place and only two which responded had set absolute targets to reduce their water consumption.

Simon Scruton of the eThekwini water department said the current figure for non-revenue water was 33 percent.

“The best water utilities in the world struggle to get non-revenue water below 15 percent,” he said.

By comparison, the non-revenue figure for London and Sao Paolo was about 30 percent.

An analysis of eThekwini’s water usage suggests that of 314 million kilolitres bought last year, 66 percent was treated as authorised consumption, while more than 8 percent was classified as water losses due to illegal consumption or metering inaccuracies. The real losses of 23.8 percent were due to leaks in the municipal system.

The majority of unauthorised use was from 40 000 illegal domestic water connections and the city was still offering an amnesty to these illegal users to reconnect legally at a cost of R250. – The Mercury

Low water prices are one of the reasons for flagrant wasting of this precious resource in South Africa.  When water tariffs skyrocket in the coming decades, it will result in a change in perception; wasting water is not generally perceived as a crime now but in the future it definitely will.  Many even take rainfall for granted but our changing climatic conditions are making rainfall unpredictable.  There is a way of obtaining ‘free water’; by harvesting rainwater and storing it in rain water tanks.  Installing water tanks saves money and ensures a supply of water when there is a water supply problem.