Water under stress due to food crisis 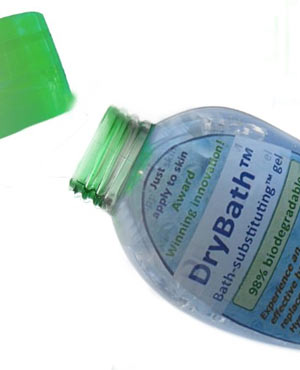 Johannesburg – With inspiration from a friend too lazy to take a shower and a few months of research on the internet, South African university student Ludwick Marishane has won global recognition for an invention that takes the water out of bathing.

Marishane, a 22-year-old student at the University of Cape Town student invented a product called DryBath, a clear gel applied to skin that does the work of water and soap.

The invention, which won Marishane the 2011 Global Student Entrepreneur of the Year Award, has wide applications in Africa and other parts of the developing world where basic hygiene is lacking and hundreds of millions of people do not have regular access to water.

The product differs from the anti-bacterial hand washes by eliminating the heavy alcohol smell. It creates an odourless, biodegradable cleansing film with moisturisers.

He came up with the idea as a teenager in his poor rural home in the winter when a friend of his said bathing was too much of a bother, made all the worse by a lack of hot water.

“He was lazy and he happened to say, ‘why doesn’t somebody invent something that you can just put on your skin and you don’t have to bathe’,” said Marishane.

It was his “eureka” moment.

He then used his web-enabled mobile phone to search through Google and Wikipedia in pursuit of a formula. Six months later, he came up with DryBath and a obtained a patent.

The product is now manufactured commercially with clients including major global airlines for use on long-haul flights and governments for its soldiers in the field.

Marishane also sees it helping conserve water in the poorest parts of the world.

“DryBath will go a long way in helping communities.”

This product will be a boon to many who do not have access to clean water.  Rural communities would also benefit greatly from (government subsidized?) rainwater harvesting projects.  Rural households often have corrugated iron roofs which make them ideal for collecting rainwater; the rainwater system need not be complex- a simple gutter and pipe directing the rain water into a plastic water tank or rain barrel can collect thousands of litres of rainwater, even from a small rooftop.