Will climate change change us?

Does peak oil even matter?

Our climate is changing and humans are certainly part of the reason why, according to most climate scientists. Will the changes in the climate force us to change how we live? 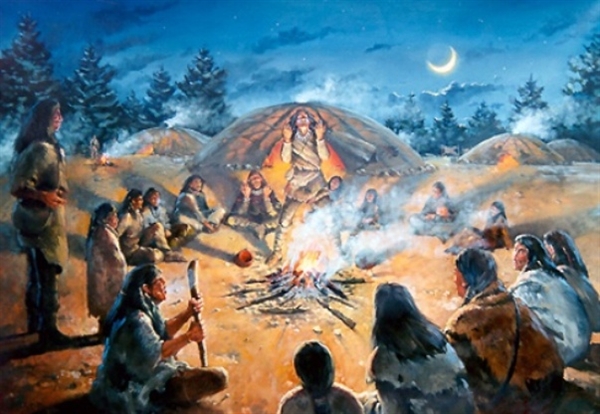 Paleoindians like the ones shown in this painting migrated into North America during the Pleistocene Ice Age.

Probably, if the past is any guide to the future. At least that’s the implication to be drawn from a newly published study that found a tight relationship between changes in the climate and human cultures in ancient North America.

The study’s authors, from the University of Ottawa, explain that archaeologists divide the chronology of prehistoric North America into three main phases: Paleoindian, Archaic and Woodland. Each period is defined by lifestyle changes that broadly show a move towards more sedentary lifestyles, along with shifts in the types of plants and animals they ate.

To see how tight the connection is between climate and cultural change, the researchers examined a database of radiocarbon-dated archaeological artifacts as well as records and reconstructions of the ancient climate in the northeastern United States. The team found that “with the exception of the transitions into the Middle and Late Woodland periods, the latter of which denotes the adoption of maize agriculture, every cultural transition corresponds to a major transition in the climate and vegetation of the region.”

The team doesn’t say that climate change directly caused the cultural shifts, but rather that humans “adjusted their toolkits” in response to the new climatic regimes. Future studies are required, they say, to pinpoint how climate causes cultural change.

The results appear this week in the Proceedings of the National Academy of Sciences.

“Correspondence does not always mean causation and the cultural response is driven by a myriad of socio-economic factors as well –- though somewhere in the mix are environmental drivers,” he told me in an e-mail.”Separating out these factors is often not possible.”

Chepstow-Lusty added that it is interesting how the introduction of maize (corn) agriculture about 1,000 years ago changed the dynamic between climate and culture in North America. He wondered how different the world would be if it was introduced thousands of years earlier.

“How would that have changed the scale and sophistication of societies in North America when the European arrived — or would connections have already been made in a different direction? Who knows!” he said.

More information on the study and additional perspective from experts can be found on Science Now.

We shouldn’t be waiting for our environment and climate to change and only then alter our habits and culture.  In ancient times humans had far less control of their environment and were forced to adapt.  We now have developed an understanding of many cause-effect factors and we should be changing  our culture in order to prevent further damage to our environment.  Water and energy are two key factors that influence our environment, depending on how we utilize these resources.