By admin on December 17, 2010 in environmental issues 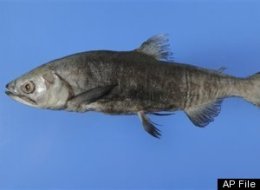 TOKYO — A Japanese salmon species thought to be extinct for 70 years is alive and well in a lake near Mount Fuji, a science professor said Wednesday.

The black kokanee, or “kunimasu” in Japanese, was thought to have died out in 1940, when a hydroelectric project made its native lake in northern Akita Prefecture more acidic.

Before then, 100,000 eggs were reportedly transported to Lake Saiko but the species was still thought to have died off.

But Tetsuji Nakabo, a professor at Kyoto University, said his team of researchers found the species in Lake Saiko, about 310 miles (500 kilometers) south of the native lake.

“I was really surprised. This is a very interesting fish – it’s a treasure. We have to protect it and not let it disappear again,” he said.

He posed for pictures and video with a specimen that was dark olive with black spots on its back. The kunimasu grow to about a foot (30 centimers) in length.

Nakabo said the lake had sufficent kunimasu for the species to survive if the current environment is maintained, though he said in interviews he hoped fishermen would not catch it.

Lake Saiko is in a region popular with tourists for its Fuji views and hot spring baths.

The salmon is still listed as extinct in the public records of the Environment Ministry. Yobukaze Naniwa, an official at the ministry, said Nakabo’s claim would be investigated before records are due to be updated in 2012.

Other species, including shellfish and plants, have also been discovered in Japan after being declared extinct, Naniwa said.

There have been a few such cases of animal and plant species ‘reappearing’ in recent times.  An example is that of the Giant Sable; this species was thought to be extinct but in 2006 two small herds were located in Central Angola.  Sadly, most often when a species is declared extinct, it really is gone forever and there are species going extinct daily.  A second chance for humankind to save species from extinction should be regarded as an amazing gift and every effort should be made to bring them back from the brink.