MBOMBELA – One should bear in mind that the 2017/18 rainy season could again be late and poor as we are still in a dry cycle. We always have to use this precious resource wisely. 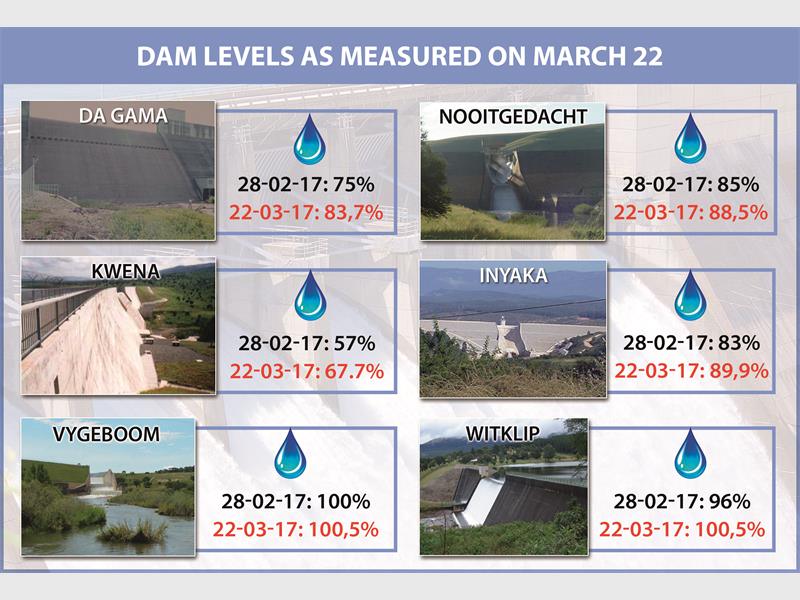 MBOMBELA – Many of these people reside in the Lowveld where there have been regular service-delivery protests in recent weeks. Meanwhile, water restrictions remain in place across the City of Mbombela until further notice, despite a marked improvement in dam levels.

Water is a basic human right
Dan Mashitisho, director general of the Department of Water and Sanitation, said on World Water Day (Tuesday), that clean and safe water is not a privilege but a basic human right which everyone should enjoy as enshrined in our Constitution.

Durban hosted the 2017 United Nations World Water Day summit and expo this week. One talking point included ensuring availability and sustainable management of water and sanitation for all. Yet, the country is experiencing a growing water crisis; with infrequent rain in some areas and restrictions placed on businesses and households in several parts of the country.

“As we have seen, flash flooding, as a result of drought, can also wreak devastation on underprivileged communities.

Water sources get severely contaminated, which causes water-borne diseases, poor health and even death,” he said.

Access to clean water is a global crisis
Mabaso explained that in 2014, Unicef estimated that 663 million people lack access to improved drinking water and that 319 million of these individuals live in sub-Saharan Africa.

Watch out for the 2017/2018 dry season
In the Lowveld, Vyggeboom Dam close to Badplaas and Witklip Dam near Sabie are at more than 100 per cent capacity. Kwena Dam’s capacity has improved from just 23 per cent in January to more than 67.

Sembcorp Silulumanzi spokesman, Richmond Jele, said in January the dam had to be at least 55 per cent by the end of the summer to avoid challenges through the winter months.

The water company recommends the consideration of the suspension of water restriction and drought tariffs, but warns it may be necessary to reintroduce the measures again at the end of the year.

One should bear in mind that the 2017/18 rainy season could again be late and poor as we are still in a dry cycle. We always have to use this precious resource wisely,” Jele said.

Jacques Benade of provincial disaster management stressed that the Lowveld was still in drought.

“People need to realise that southern Africa, by nature, is always in drought. We must carry on using water sparingly and find innovative ways to recycle waste water,” he said.