Half of South Africa’s water going down the drain

Nearly 50 percent of tap water is being stolen, wasted or simply leaking away every year in South Africa, the 30th driest country in the world. 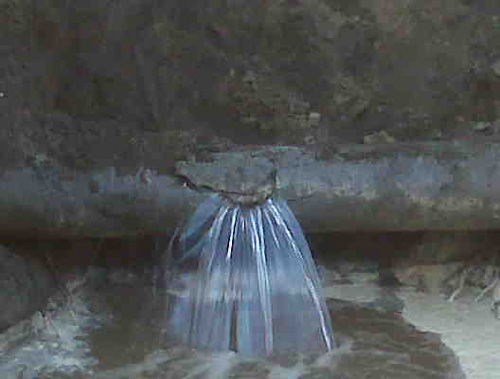 Record-keeping and water-metering is so shoddy that some municipalities don’t even know how much water they are using, according to a new report commissioned by the Water Research Commission.

Based on the most comprehensive study to date on national tap water use, the report estimates that 36.8 percent of municipal water (worth more than R7 billion) can be classified as “non-revenue water”.

This term includes water that leaks out of broken pipes and also water that is not paid for (but excludes the government’s free basic water allowance).

The report to the commission says the country’s non-revenue water use is similar to the world average, but such losses are unacceptable in a water-scarce country.

And, while the official estimate of non-revenue water is given as 36.8 percent, the authors warn that the true figure could be as high as 47.7 percent because of the massive volume of unpaid water bills written off as bad debts.

The report by Ronnie McKenzie, Zama Siqalaba and William Wegelin, of WRP Consulting Engineers, is based on data from 132 of the country’s 237 municipalities and covers water usage to the end of the 2010 financial year.

“Levels of payment are very low in some parts of the country and this inadvertently has a major influence on the non-revenue water, since there is little incentive to save water when the user has no intention of paying for it.”

“The lack of information from 55 percent of the municipalities indicates that more than half of the country’s municipalities are not even aware they have a problem”.

The worst offenders were rural municipalities and, in several areas, water reticulation systems had reached the end of their design life, with burst pipes now a common phenomenon.

As one of the driest nations in the world, decisive action and stronger political will was needed to solve the problem and avert a “potential water crisis”.

The consultants acknowledge that all water systems around the world leak and it is not possible to eliminate leaking or revenue losses completely.

The highest volumes were lost in large cities and towns, which collectively accounted for about 85 percent of tap water use.

Among the large cities, Cape Town’s non-revenue water losses were lowest at 25 percent, followed by Tshwane (Pretoria) at 26.5 percent, Durban at 37.5 percent and Joburg at 38.2 percent.

The losses in Pietermaritzburg were 63 percent, Ladysmith and Estcourt, both 68 percent, Newcastle 46 percent and Richards Bay/Empangeni 27 percent.

For example, the Umdoni municipality (Scottburgh) on the KZN South Coast emerged as one of the star performers in the country (with reported non-revenue losses restricted to just 8 percent), whereas in nearby Umzumbe, water losses are around 76 percent.

Some of the worst performers were Nongoma, Ulundi and Paulpietersburg which were aware of 100 percent losses.

There was no data for municipalities such as Nkandla, Jozini, Hluhluwe, Hlabisa, Melmoth, Mtubatuba, Kwambonambi or Umlalazi, indicating that municipal managers in these areas did not know how much water they were using or who was paying for it.

“Metering, billing and cost recovery is a major problem area that requires attention. Training of councillors, as well as financial and technical personnel, is also needed,” he said.

During his State of the Nation address in 2010, the report noted, President Jacob Zuma set a target to halve water losses by 2014.

This was unlikely to happen and there were signals that the volume of water loss was increasing yearly.

Part of the problem was that many RDP houses and informal settlements had no water meters.

“Once these settlements have been completed, the matter of who should be billed for consumption becomes problematic, as often there is a lack of political or administrative will and leadership to ensure that the proper processes are followed and that the responsible consumers are linked to the municipal system.”

Although the City of Tshwane (Pretoria) had installed bulk meters in these areas and then sent the bill to the Department of Human Settlements for payment, there was no standard policy for dealing with this issue in many municipalities.

The report said the total percentage of non-revenue water seemed to be increasing every year, while paid-for water volumes remained static.

“If the figures prove to be correct and the trend continues, it is of major concern as it raises doubts regarding the long-term sustainability of water services throughout South Africa.”

Anybody in South Africa reading these shocking statistics should be considering their own water use practices and should ensure that they are not part of the problem.  Another factor is that all these water losses will need to be made up for from an ever-dwindling supply of available fresh water.  The cost of municipal water will rise rapidly in the coming years and if nothing is done to repair and upgrade ailing water infrastructure, water supply cuts will become even more common.  Businesses and homeowners can become more proactive and protect themselves from high water tariffs and water cuts by installing water conservation systems such as greywater recycling and rainwater harvesting.  Water tanks are at the centre of many water systems; be sure to choose high quality water tanks that will last for a long time.  We recommend water tanks, rain water tanks and other products manufactured by JoJo Tanks (South Africa).  Click on the links below to find your ideal JoJo water tank, JoJo tank stand or other JoJo Tanks product.