Dwindling profitability and water scarcity have left South Africa with less than two-thirds of the number of food-producing farms it had in the early 1990s, says the latest agricultural trends report by the World Wide Fund for Nature in South Africa. 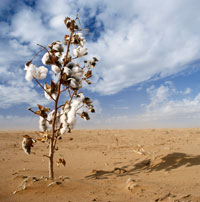 The report indicates that failed land reform projects and the flight of commercial farmers from South Africa’s shores were not the only contributors to declining farming potential in the country.

The fund’s CEO, Morné du Plessis, said drought, declining rainfall or excessive demand for water was putting a strain on South African farming. In many instances the lost farms had been changed to other land uses, or consolidated into larger farming units to achieve economies of scale.

As a result, the area under maize, wheat and dairy has decreased significantly over the past 20 years. According to Agricultural Statistics 2008, production has remained relatively constant, indicating an increasing trend towards intensified production since less acreage was yielding a lot more than before.

This also meant that the remaining farms had generally increased their investment in irrigation, fuel, fertiliser, mechanisation and genetically modified seed inputs.

At the Agricultural Business Chamber Congress in June, Ernst Janovsky, head of Absa AgriBusiness, pleaded with advisory services providers not to take advantage of vulnerable small-scale farmers by only promoting their products but to act in the interest of the country and also assist in soil preservation.

The World Wide Fund-South Africa report also warned that poorly managed intensive farming had a negative effect on the natural environment, on people’s wellbeing and on a farmer’s ability to adapt to change.

The report acknowledged that input costs required for intensive farming were increasing and subject to constant changes in the oil price, the price of raw materials and exchange rate fluctuations, leaving farmers with little control over their business affairs.

It also cautioned against intensified agriculture that could increase mechanisation, which in turn led to fewer jobs on farms. The report warned against the unintended consequences of the move towards genetically modified crops, particularly those dependent on herbicides and fertilisers.

A case cited by the report occurred in 2007, when fertiliser imported from China and used on Eastern Cape pineapple farms was found to contain toxic levels of cadmium, arsenic and lead. This resulted in an export ban by the EU.

Abundant water resources are a thing of the past for most farmers in South Africa and the cost of pumping water from rivers, dams and reservoirs has risen steeply due to the skyrocketing cost of electricity.  Rainfall patterns have become unpredictable and rainfall events have become extreme when they do occur, often resulting in erosion and crop destruction.  Many farmers have been practising some form of rainwater harvesting for a long time, especially on a small scale.  Significant amounts of rainwater could be collected from the rooftops of buildings found on farms, for example storage sheds and barns (a few 10000 liter water tanks or even 15000 liter or 20000 liter tanks would ensure a good supply of rainwater for irrigation).  Businesses and homeowners can install rain water tanks too and enjoy the many benefits of rain water.  Click on the links below to view the various rainwater tanks, water tanks, chemical tanks, tank stands, septic tanks and other JoJo Tanks products available in South Africa.

Texas Rain Bottling Company, Uses Rainwater Even Amid Drought
Global Warming From the Roof of the World