Money may not grow on trees but apparently it can fall from the sky, assuming you know how to collect, filter and bottle it. 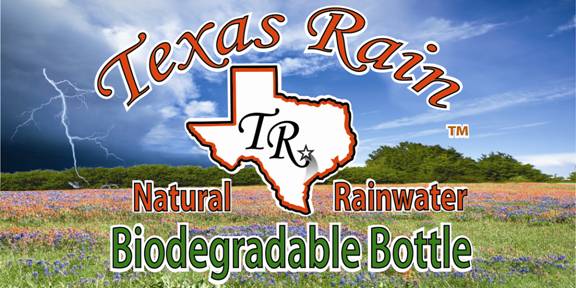 In this case, that money comes in the form of rainwater. That’s right, Texas business owner David Schraub seems to be turning that most basic compound into cold hard cash with Texas Rain, his rainwater bottling company, KVUE reports.

And nothing can stop his booming business, not even the worst drought in decades.

“Even during the drought, we had plenty of water left over, since we only need about seven to ten inches a year to operate our manufacturing facility,” Straub told KVUE.

A recent contract with the NFL’s St. Louis Rams for a “Thirst and Ten” label is helping the company grow out its already rapid success, BizJournals reports.

The company became profitable in 2010, thanks in part to the 18,000 square foot roof of its bottling plant that doubles as a rain collection system (a single inch of rainfall can yield up to 12,000 gallons of drinking water).

The benefits of drinking rainwater have been debated, with the Virginia Department of Health advising residents last year to avoid drinking rainwater due to trace amounts of radiation believed to be caused by Japan’s recent nuclear disaster, NBC Washington reports. Meanwhile, an Oregon man was sentenced to 30 years in jail for harvesting rainwater thanks to an old law that prohibits residents from keeping water reservoirs, CNSNews.com reports.

There are some advocates of rainwater drinking though. A 2009 Australian study, for example, found that it is safe to drink, and some Southeast Asian countries have highlighted how harvesting rainwater can eliminate underground contaminates and reduce run off during monsoon season. For its part, Texas Rain has fewer minerals than ground water and is also free of chlorine.

Rainwater harvesting is gaining popularity in South Africa as business owners and homeowners realise the benefits of having rain water tanks installed on their properties.  Many busineses and industrial buildings have large roof surface areas ideal for harvesting rainwater; a few 10000 litre tanks or even 15000 litre or 20000 litre water tanks could store thousands of litres of rainwater.  Rainwater is naturally pure in most regions of the world and can be safely used for drinking water once appropriately filtered (to remove contaminants that may have been collected off the rooftop and gutters).  Rainwater is also very ‘soft’ and the difference between bathing/showering with rainwater compared to chemical-laden municipal water has to be experienced to understand.  Rainwater has also been proven to be better for plants and lawn than municipal water.  There are a wide variety of water tank sizes and types; check out the various JoJo Tanks products (South Africa) by clicking on the links below.