The availability of freshwater presents one of the greatest risks to our global economy. 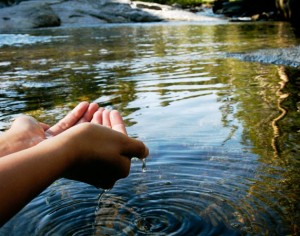 The World Economic Forum’s (WEF) Global Risk Report 2012 lists a global water supply crisis as the second most important global risk, following shortly on the heels of a major systemic failure of our financial systems.

However, focussing on scaremongering has never been a good way to resolve problems and is not the way WWF approaches things. Let us rather accept that there is urgency to act, and focus on the nature of these risks and how we can respond to them. Our global water risks are driven by three characteristics of our modern world: a more crowded, connected and complex world.

Firstly, let us consider our crowded world. Here, the most important factor is not simply the increasing number of humans that inhabit our planet, but rather the increasing consumption patterns of a growing middle class and the consequent pressure on basic resources such as water, energy and food. The 2030 Water Resources Group estimates that global water requirements will increase by 40% by 2030; the Food and Agricultural Organisation (FAO) estimates that global food production will need to increase by 40% by 2030; and the International Energy Outlook 2011 estimates that energy requirements will also need to increase by at least 40% by 2030. With this extreme pressure we quite literally need to find ways in which we can squeeze greater levels of efficiency out of this finite resource base.

Here we believe that the greatest gains are to be made through better integrated planning and land-use. For example, it is no longer good enough to only think of maximising food production on agricultural land. We need to be thinking about how we optimise the best overall food, water and energy benefits from a piece of land. Intelligent planning and design of agricultural land can reduce impacts on freshwater ecosystems, such as wetlands and rivers that purify and control flows of water for the benefit of the farm itself as well as downstream users. Delivery of such multi-functional landscapes with multiple beneficiaries is going to require carefully constructed partnerships between the private and the public sector. To this end, the Department of Water and Environmental Affairs’ recently launched Land-user Incentives Programme, is a great example.

WWF South Africa’s Sustainable Agricultural Programme is also working with a number of agricultural sectors to develop and implement new production practices that optimise agricultural production, whilst minimising impacts on their ecological systems that provide other services, such as water production, to a broader society. The implementation of these practices is being supported by a number of large local and multi-national corporations, who recognise the systemic nature of water risks.

The second characteristic of importance here is that we live in a highly connected world. For instance, 70% of the water footprint of the United Kingdom (i.e. the water required to grow crops to feed its people and sustain its industries) lies outside of the borders of the United Kingdom. This means that poor water governance in another part of the world can place the economy and well-being of the people of the United Kingdom at risk. Global multi-national companies such as the Coca-Cola Company and SAB Miller, who have global supply chains that are critically dependent on water, are recognising and responding to this.

In a recent study, SAB Miller found that more than 95% of its water dependence lies in their agricultural supply chain; in the production of crops such as barley and hops, much of which is within South Africa. In a follow-up to this study WWF and SAB have been able to show that the greatest driver of water risk to its hops production is the ecological degradation of the catchments within which its farms are located. This series of studies have therefore been able to connect one of South Africa’s favourite past-times (beer consumption) via a large multi-national company to the ecological rehabilitation of rainfall catchments in the country. With this connectivity comes great opportunity and power to influence the way we think about and manage our water resources and ecological systems.

Finally, a more crowded world with greater connectivity inevitably leads to a more complex world. Water quality and availability underpins both food and energy production, leading us to what is fast becoming recognised as the defining challenge of our generation – the water, energy, food nexus. The intense pressures on these three essential resources, as described above, as well as their inter-relationships with each other, are urgently requiring us to think in fundamentally different ways about planning for these resources. We can no longer plan the exploitation of each one of these resources in a single-variant way (i.e. only considering one resource in isolation), we need to explicitly consider the inter-relationships, trade-offs and synergies with the other two essential resources.

The relationship between water and food production through irrigated agriculture, should be apparent to most. However, less well understood is the relationship of energy production with water and consequently food. Here it is important to note that different energy options have different levels of impacts on water systems. For instance, whilst the water consumption of coal-fired power stations is relatively modest, the mining of coal has potentially devastating impacts on our water resources. The current Acid Mine Drainage (AMD) pollution crisis is testament to this. Unfortunately, a proportion of South Africa’s coal reserves overlap with our highest rainfall areas that are of critical national strategic importance from a water security point of view. Indiscriminate development of these coal fields will place our national water security at significant risk. The argument for a judicious reduction of our reliance on coal therefore becomes more than a climate change or carbon argument, but also one around water. However, we also need to treat potential renewable energy options with the same brush. For example, the production of bio-fuels, is one of the most water-intensive ways to produce energy and, based on South Africa’s water context, needs to be considered very carefully as an option. On the other hand, renewable energy sources such as solar (particularly photovoltaic), and wind have negligible impacts on water and food production, making them very compatible sources of energy within a water-energy-food nexus.

There is no other way to put it, this is a complex space. However, we will need to start developing planning approaches that can deal with these multi-variant inter-relationships in an explicit way. South Africa’s National Planning Commission is ideally placed to play a key leadership role in this space. We simply have to crack this code.