By admin on March 19, 2010 in water conservation, water footprint

What is your country’s ‘water footprint’? 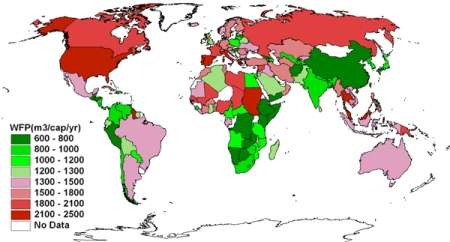 “Today, 766 million people live in Africa alone, a figure expected to rise to 1.3 billion by 2025.  More than 40 percent of the continent’s land surface is considered to be dry, and another 27 percent is classified as desert.  UNEP suggests that 14 African countries, mostly in the north, face water scarcity right now.  UNFPA reckons that at least another five – Kenya, Morocco, Rwanda and South Africa – will join them within the next decade, with half a dozen more in the next 25 years.  UNDP says that by the year 2025 almost one in two Africans will be living in an area of water scarcity or water stress.”

Calculating an individual’s- or nation’s ‘water footprint’ is unlikely to provide an absolute accurate figure but is useful for comparative purposes.  Likewise, we all know that statistics are sometimes manipulated by organisations to suit their agendas (as Mark Twain said: “There are three kinds of lies: lies, damned lies and statistics”).  However, statistics aside, it should be obvious that the world and particularly many African countries will be facing serious water shortages (if not already) sooner rather than later.  Water Rhapsody Conservation Systems supply tried and tested water saving systems and devices for the water crisis we are facing in South Africa. Ensure that you are prepared and start reducing your water footprint now by installing rainwater tanks (rooftop rainwater harvesting ) and grey water recycling systems.  Water storage is integral to our systems and to contingency water supplies.  Everyone should have a rainwater tank or a water tank for storing municipal or borehole water for household use.  Water scarcity is a growing reality around the world and particularly in sub-Saharan Africa.  We are also facing a global energy crisis.  This is why we at Water Rhapsody Mpumalanga have incorporated Yes Solar (solar energy) so that you can reduce your dependence on fossil fuels and move toward renewable, green solar energy.  Yes Solar markets and supplies German-made Solsquare solar water heating systems that are SABS-approved and are eligible for Eskom’s solar geyser rebate scheme.  Solsquare solar water heaters are always installed by qualified solar installers and carry a 10 year warranty.  Contact us for a free quote on a solar geyser, water system or water tank (we are authorized JoJo Tanks dealers and supply the full range of JoJo water tanks and JoJo tank stands).  We can also supply Atlas Plastics water tanks.  Our water tank prices are highly competitive!

Natural Water Purification
Rainwater harvesting illegal in some US states!