MIT engineers have created a new polymer film that can generate electricity by drawing on a ubiquitous source: water vapour. 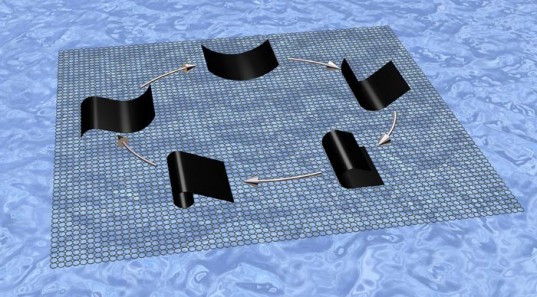 The new material changes its shape after absorbing tiny amounts of evaporated water, allowing it to repeatedly curl up and down. Harnessing this continuous motion could drive robotic limbs or generate enough electricity to power micro- and nanoelectronic devices, such as environmental sensors.

“With a sensor powered by a battery, you have to replace it periodically. If you have this device, you can harvest energy from the environment so you don’t have to replace it very often,” says Mingming Ma, a postdoc at MIT’s David H. Koch Institute for Integrative Cancer Research and lead author of a paper describing the new material in the Jan. 11 issue of Science.

“We are very excited about this new material, and we expect as we achieve higher efficiency in converting mechanical energy into electricity, this material will find even broader applications,” says Robert Langer, the David H. Koch Institute Professor at MIT and senior author of the paper.

The new film is made from an interlocking network of two different polymers. One of the polymers, polypyrrole, forms a hard but flexible matrix that provides structural support. The other polymer, polyol-borate, is a soft gel that swells when it absorbs water.

Previous efforts to make water-responsive films have used only polypyrrole, which shows a much weaker response on its own. “By incorporating the two different kinds of polymers, you can generate a much bigger displacement, as well as a stronger force,” Guo says.

The film harvests energy found in the water gradient between dry and water-rich environments. When the 20-micrometer-thick film lies on a surface that contains even a small amount of moisture, the bottom layer absorbs evaporated water, forcing the film to curl away from the surface. Once the bottom of the film is exposed to air, it quickly releases the moisture, somersaults forward, and starts to curl up again. As this cycle is repeated, the continuous motion converts the chemical energy of the water gradient into mechanical energy.

Such films could act as either actuators (a type of motor) or generators. As an actuator, the material can be surprisingly powerful: The researchers demonstrated that a 25-milligram film can lift a load of glass slides 380 times its own weight, or transport a load of silver wires 10 times its own weight, by working as a potent water-powered “mini tractor.” Using only water as an energy source, this film could replace the electricity-powered actuators now used to control small robotic limbs.

“It doesn’t need a lot of water,” Ma says. “A very small amount of moisture would be enough.”

The mechanical energy generated by the material can also be converted into electricity by coupling the polymer film with a piezoelectric material, which converts mechanical stress to an electric charge. This system can generate an average power of 5.6 nanowatts, which can be stored in capacitors to power ultra-low-power microelectronic devices, such as temperature and humidity sensors.

If used to generate electricity on a larger scale, the film could harvest energy from the environment — for example, while placed above a lake or river. Or, it could be attached to clothing, where the mere evaporation of sweat could fuel devices such as physiological monitoring sensors. “You could be running or exercising and generating power,” Guo says.

On a smaller scale, the film could power microelectricalmechanical systems (MEMS), including environmental sensors, or even smaller devices, such as nanoelectronics. The researchers are now working to improve the efficiency of the conversion of mechanical energy to electrical energy, which could allow smaller films to power larger devices.

This is yet another example of how water and energy are linked and how important water is to us now and in the future.

Water is a precious resource and water tariffs around the world are set to rise steeply in the coming years.  Businesses and homeowners can protect themselves from high water costs and water scarcity by the installation of rainwater tanks.  Rainwater harvesting allows the collection of free water.  Ensure that only high quality water tanks are used in any water conservation system; we recommend JoJo Tanks of South Africa.  Click on the links below to find your ideal jojo water tank, jojo rain water tank, jojo tank stand, jojo septic tank of other high quality JoJo Tanks product.