Common practice for the monitoring of insecticides in water resources reveals shortcomings. 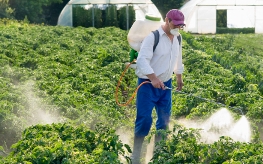 This is shown by a current study conducted by the Landau-based Institute of Environmental Sciences of the University of Koblenz-Landau. Until now water samples have mostly been taken on fixed dates, for example once per month. However, insecticides enter water resources very irregularly and, even though their concentrations exceed the threshold levels only for a short time, their harmful effect is present. The consequence: If one bases the evaluation upon the zero values often measured within the scope of regular sampling, the overall evaluation underestimates the actual risks.

Compared with herbicides and fungicides, which have a largely preventive effect and are frequently applied, insecticides are employed only in cases of acute insect infestation. Accordingly, correspondingly high doses are applied discretely to fields in order to achieve the desired results. Although insecticides often show only short half-lives in the environment, these highly toxic substances potentially enter water resources, where they can be harmful to aquatic insects and other invertebrates. These organisms react very sensitively to insecticides, so that aquatic community compositions can be changed in favour of less sensitive species.

Consequently, the monitoring of water resources requires that samples be taken particularly when insecticides are applied or severe periods of rain wash these into the water. Due to lack of personnel, insufficient financial allocation and logistical restrictions, however, mostly regular fixed dates are chosen.

“Our study shows that current methods of sampling for the investigation of insecticides in water resources are unsuitable,” declares Ralf Schulz of the Institute of Environmental Sciences in Landau. “Accordingly, by way of example, on the basis of weekly monitoring of a typical agricultural stream none of the total of six insecticide concentration peaks per year described by model calculations is found. Daily sampling detects only two of the six peaks. Only event-related sampling enables the detection of all these peaks. Assuming that the overall costs increase according to the number of fixed-interval samples, on the other hand, the event-related procedure greatly reduces the costs. Furthermore, the benefits are substantially greater. Current practice wastes considerable sums of money, as many of the fixed intervals do not coincide with periods of high insecticide concentrations.”

If water resource monitoring detects no insecticide pollution in waterways and, as a result, no exceeding of the threshold levels this is therefore often not because the water resources are in fact unpolluted, but because the samples are taken at the wrong point in time.

“The values resulting from this sampling therefore give a completely false picture of the true impact of insecticides,” adds Sebastian Stehle, principal author of the Landau study. “Including results in the evaluation according to which no pollution has been detected distorts the evaluation and simulates a false sense of safety. Samples showing no evidence of insecticide pollution should therefore not be considered — at least as long as environmental impact monitoring takes place statically. Still better would be event-related sampling, at least in high-risk areas.”

The environmental pollution of water resources could be reduced with a number of cost-effective and efficient measures: For example, the border strips between area used for agricultural purposes and water resources would have to be widened and effectively structured. Hedges at the edge of the field would reduce the spray drift. Furthermore, constructed wetlands should be furnished with plants, which according to previous studies of the Institute of Environmental Sciences in Landau are capable of reducing pesticide exposure up to 70 per cent.

“Particularly agriculture is fully conscious of its dependence upon natural production factors, such as soil and water, and would like to produce healthy products as free as possible of residues,” states Ralf Schulz. “In addition, with these measures agriculture can make a very important positive contribution to the protection of nature and biodiversity in a ‘culture landscape of the future’.”

Another way to reduce insecticide pollution of waterways is to reduce stormwater runoff by harvesting rainwater.  This is especially helpful in urban areas where natural ground has been replaced with impermeable surfaces (tarmac, buildings, paving, etc.) and so the storm water runoff is unnaturally high.  The stormwater runoff is directed to stormwater drains after it has picked up pesticides from lawns and gardens as well as other pollutants such as fuel/oil off the tarmac; all this ends up in streams and rivers, ultimately polluting drinking water.  Rainwater tanks also ensure that you have a supply of clean water in times of water supply cuts and, of course, rain water tanks and rainwater harvesting reduce your water bill.