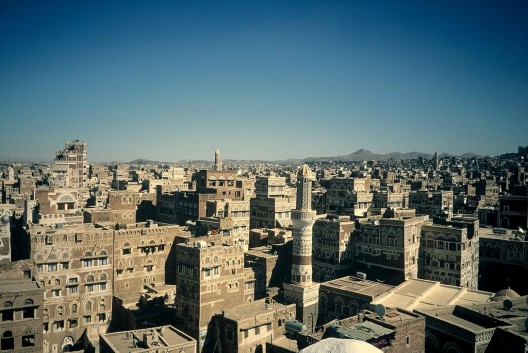 Sana’a, Yemen is at risk of being the first capital city in the world to run out of renewable, reliable and clean water supplies.

The U.S. Agency for International Development (USAID) organized a festival to celebrate the conclusion of a U.S. government-funded project to rehabilitate seven Sana’a schools by better preparing them to effectively use water.

The celebration was held in Ruqia School in Sana’a, and Minister of Education Dr. Abdulrahaman Al-Ashwal and representatives of USAID attended.

The project, which focused on the issue of water scarcity in Sana’a and in Yemen, implemented rooftop rainwater and collection systems and tanks. The water collected from the low roofs during rainfall is transferred to water tanks to be later used. These systems harvest rainwater for each school’s gardens and restrooms.

The goal of rooftop water harvesting is to save water that would otherwise be wasted through runoff or evaporation.

Robert Wilson, the director of USAID in Yemen, said these projects are in-line with cooperation initiatives between the American and Yemeni governments to resolve water problems in Yemen.

“Given the critical water shortage issue that Yemen is facing, there is a serious need for water conservation and management techniques such as rainwater harvesting.”

The rainwater collection technique is an easy, cheap way for collecting water from low roofs, which could result in many advantages, he said.

During the past eighteenth months, 69 schools nationwide were rehabilitated, and 17 more schools will have water collection systems installed.

Al-Ashwal told the Yemen Times that the school organized the festival to help teach students about methods for preserving water and about advantages of rainwater collection. Based on expert opinions, the festival addressed how to take advantage of rainwater in Sana’a, as it is threatened by a drought.

Al-Ashwal said educating youth on important issues facing the country is the way toward building a new Yemen.

Rainwater harvesting systems implemented in schools are a great way of raising awareness in a rapid and effective way.  Rainwater tanks are usually highly visible and thus the children can easily see the workings and benefits of rainwater harvesting.  The students are then highly likely to talk about the systems with their families, thus educating them too.  South African schools would also benefit from rain water tanks and rainwater systems as many of our schools lack running water, especially in poor, rural areas.  Click on the links below to choose your ideal water tank, rainwater tank, tank stand or other JoJo Tanks product.