Most of us don’t smile when we see a water bill, but Phillip Johnson is different. 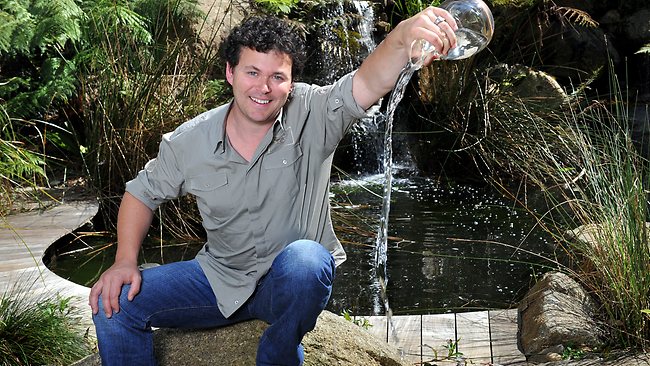 Phillip Johnson has not had a water bill in 11 years. Photo: Mike Keating

As a landscape designer, he advises households how to use water smarter and reduce their bills  – and his No.1 tip is capturing the rain.

“Install a rainwater tank, even if it’s only a few thousand litres, and it’s very important you use that water around the home,” Johnson says. “Don’t just let it sit there.”

National water conservation group, the savewater! Alliance, rates rainwater tanks in its top five ways to save money on water.

National programs manager Michael Smit says a rainwater tank connected to the toilet and washing machine and used for outdoor watering can save households up to $250 a year.

“Across Australia, between 2004 and 2010, rainwater tank ownership increased from 17 per cent (of households) to 26 per cent,” he says. Front-loading washing machines and water-saving shower heads are also going to reap significant savings for homeowners.

Smit calculates a front-loading washing machine will save about 21,000 litres of water a year, or $55, and water-saving shower heads save up to $60 a year in water and energy costs.

“The shower heads are a relatively cheap investment and payback is in just six months,” he says.

Smit says people with a swimming pool can lose up to 1000 litres of water a day in evaporation, so a pool cover can be a smart investment.

And with the cost of bottled water more than 1000 times that of tap water, Smit says it makes sense to carry a refillable water bottle.

“You could save about $900 a year with a refillable water bottle,” he says.

National consumer group Choice says there are other ways people can save on their water bills – including shorter showers, checking water-rating labels on appliances and installing dual-flush toilets.

It also suggests only running the dishwasher and washing machine with full loads, fixing leaking taps and planting “water-wise” natives.

Refillable water bottle saving up to  $900

The above water saving advice and tips can be applied almost anywhere in the world.  The cost savings can also be a guideline, no matter whate currency.  South Africa’s municipal water costs are set to rise rapidly over the next few years (to fund expansion and maintenance of our water infrastructure) so it definitely makes economic sense to save water and harvest rainwater wherever possible. Harvesting rainwater and recycling greywater also makes ecological sense – excess rainwater is prevented from entering stormwater drains and ultimately ending up in our water courses (after picking up contaminants and pollutants from streets and yards).  Greywater is a major component of sewage; reusing/recycling gray water (Eg. grey water irrigation) reduces the pressure on overloaded sewage systems that often overflow into rivers in South Africa.  Choose rainwater tanks carefully according to your roof area and local rainfall patterns; click on the links below to see the wide range of water tanks available from JoJo Tanks South Africa.