PITTSBURGH — More than 100 protests against the natural gas drilling process known as fracking are scheduled to take place around the world today, building on public concerns but also using a highly simplified message to spur outrage. 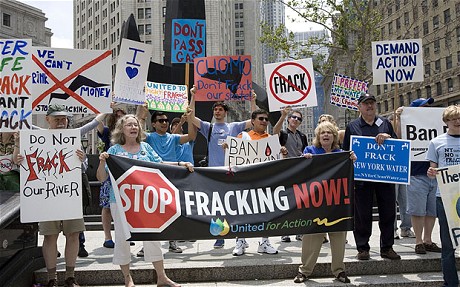 The GlobalFrackdown website and campaign were developed by Food & Water Watch, a Washington, D.C., nonprofit group that was once part of Ralph Nader’s Public Citizen. The campaign claims that fracking “has already damaged communities and ruined lives. It pollutes water and makes people sick.”

Scientists disagree on the risks of fracking, a process that injects large volumes of water, sand and chemicals underground to break rock apart and free the gas. The U.S. Environmental Protection Agency and many state regulators, however, say that fracking can be done safely. The American Lung Association says natural gas has helped reduce air pollution as many dirtier coal-fired power plants shift to natural gas.

The immense volume of natural gas found in formations of shale rock around the country has spurred a boom in natural gas production that has been credited with creating jobs and lowering prices for industry and consumers.

The Frackdown campaign doesn’t mention the differing opinions over risks or any benefits of fracking.

Mark Schlosberg, the national organizing director for Food & Water Watch, said supporters of the campaign are concerned about access to safe drinking water now and in the future. And some people simply don’t want fracking in their communities, he said.

“The message is, we need to ban fracking,” Schlosberg said. “We think fracking is just another dirty fossil fuel.”

Protests are planned in cities that include Pittsburgh, New York, Paris and Madrid.

Among the largest U.S. shale gas deposits are the Marcellus Shale, under parts of Pennsylvania, New York, Ohio and West Virginia, and the Barnett Shale in North Texas.

Contaminated wastewater from the process can leak from faulty well casings into aquifers, but it’s often difficult to prove a connection. Some studies also have shown air quality problems around gas wells, while others have indicated no problems.

Regulators contend that overall, water and air pollution problems are rare, but environmental groups and some scientists say there hasn’t been enough research on those issues.

At an industry conference this week in Philadelphia, XTO Energy President Jack Williams acknowledged that some Americans remain concerned about the impact of drilling on their communities.

“Our industry must take steps to strengthen public confidence,” he said.

James Saiers, a professor of hydrology at the Yale School of Forestry & Environmental Studies, said some people on both sides of the fracking debate are locked into assumptions.

“The critics on either side, they tend to believe the worst,” Saiers said. “And that’s unfortunate, because there are sincere people on either side. It will remain a polarized issue. Even data or evidence is unlikely to change those assumptions.”

“My view is we have to promote renewables,” he added.

“But right now we’re locked in to fossil fuels for a while longer. And trading natural gas for coal is a benefit.”

Although controversy surrounds the extent of pollution and environmental degradation that fracking causes, there is no doubt that drilling for natural gas using the current ‘fracking’ techniques can potentially cause irreparable damage to the environment.  Even if the process was totally clean, the amound of water required for the drilling is another huge concern, especially in water scarce nations such as South Africa.  This is one of the reasons why fracking should not be allowed in South Africa’s sensitive Karoo region where precious reserves of groundwater will be squandered on extracting the shale gas.  Unfortunately South Africa’s government has now lifted the Karoo fracking moratorium, allowing Shell to go ahead with its fracking plans.