Which Municipality in South Africa has the Best Water?

The quality of drinking water in South Africa has improved significantly in the past year, with a “blue drop” score nationally of 87,6% – 15 percentage points higher than the national score for last year. 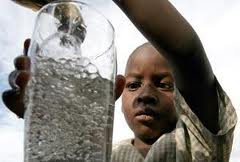 But in sharp contrast to the improved national score, the department has red-flagged 14 municipalities of largely smaller rural towns where the tap water is unsafe to drink and should be boiled before being consumed. The 14 towns are in seven of the nine provinces.

The report says that in the past year 153 municipalities and 931 water systems were audited, with 1,9-million water samples taken.

The report shows that Gauteng has the best water in the country, achieving a score of 98,1%, with the Western Cape running a close second at 94,2%. The worst-performing provinces were Mpumalanga at 60,9%, Northern Cape at 68,2% and the Free State at 73,6%.

“An interesting point to observe would be that even though provinces such as Mpumalanga and Northern Cape would record (microbiological) compliance figures much higher than the Eastern Cape, their blue drop performances are lower than the latter,” the report says.

“This can be ascribed to the finding that the blue drop programmes set requirements for risk management, which stipulate that monitoring programmes must be risk-informed. It can therefore be accepted that most Eastern Cape municipal drinking water programmes are more aligned to the risk-based models as set by the national regulatory programme,” it says.

It explains further that water safety planning is a fundamental component of the Blue Drop Certification Programme and “this implies that water supply systems without risk-management programmes, as prescribed by water planning principles, will not qualify for recognition from this incentive-based initiative”.

The report says that significant progress can be reported on this by the World Health Organisation programme.

The top-performing municipality was Ekurhuleni, with a blue drop score of 98,95%, followed by Johannesburg at 98,92%. EThekwini (Durban) was the top-placed municipality not in Gauteng, at 98,77%, with the Tlokwe municipality in North West and Cape Town also achieving scores of more than 98%.

“Assessments are conducted by a panel consisting of a qualified water quality professional as lead inspector (and) two to four inspectors,” the report says.

The report further shows that the blue drop programme was aimed at ensuring and safeguarding tap water quality and management because it was a “fact that the livelihood of mankind depends on the availability of clean drinking water”.

Although much of South Africa’s municipal tap water may be ‘safe’ from microbes, the water is often over-treated with chemicals such as chlorine which have a detrimental effect on human health over the long term.  Water filters that remove such chemicals are therefore recommended if you drink municipal tap water.  Better still, install rainwater tanks and harvest rain for pure drinking water that is directly under your quality control (rainwater should still be filtered to remove impurities from your rooftop).