Tips for Saving Water at the Office

India’s economic growth and political stability are at stake in coming years if it does not change its approach to water management, a member of its natural resources planning commission told Reuters on Monday. 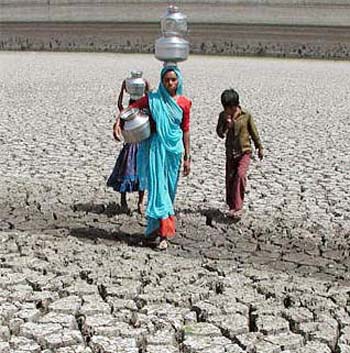 Mihir Shah, who has been asked by India’s government to come up with a new water resource strategy, said the sector needed to become more sustainable, efficient and focused on how water is used and how it reaches people.

“If this is not attended to, India’s growth story will completely go off the rails,” Shah said during an interview at the Global Water Summit 2012 conference in Rome.

“There will be water conflicts, conflicts between users, across regions, they will become very serious and a threat to the democratic fabric itself,” he said, adding that neighbouring Pakistan and Bangladesh faced similar challenges.

Water limits are close to being breached in several countries, while food output has to increase by up to 100% by 2050 to sustain a growing world population, according to the United Nations.

India’s economy is seen growing about 7% in 2012 and 2013, down from the 8.4% levels of the last two years, the
International Monetary Fund (IMF) said this month.

It is one of the world’s fastest growing economies, but development is uneven and millions still live in poverty in rural areas and urban slums with limited access to clean water and sanitation facilities.

The World Bank says key problems in India’s water sector include data secrecy, competition for resources, too much focus on increasing supply and not enough on management.

Shah said India had reached a plateau in terms of water resource exploitation, with few options for the construction of new dams, and ground water also depleting.

“We can’t expand in a quantitative sense so we have to expand by using our water more carefully,” he said.

His plans include improving data collection on the location and types of water resources, promoting water-saving farming technologies, developing sewage treatment facilities alongside water projects, and establishing a national monitoring body and a new legal framework for the sector.

“The overexploitation of aquifers has gone beyond anything imaginable and we need a new ground water law,” he said, adding that it would discourage water use deemed detrimental to the public interest.

The proposals are part of a five-year plan but he expected it would take up to 20 years for the changes to become fully entrenched.

Shah said the reform of the sector presented many opportunities for private investors, particularly in new irrigation technology and in urban sewage projects to meet the needs of expanding populations in small towns.

There are an increasing number of nations that are in a similar situation; South Africa is also facing its own water crisis.  Water conservation starts on the individual level and at home.  Eco-friendly water saving practices such as rainwater harvesting (rain water tanks), grey water recycling and a daily commitment to saving water wherever possible will help to mitigate water shortages now and in the future.