(CNN) — Wind turbines have long produced renewable energy but a French engineering firm has discovered another eco-purpose for the towering structures. 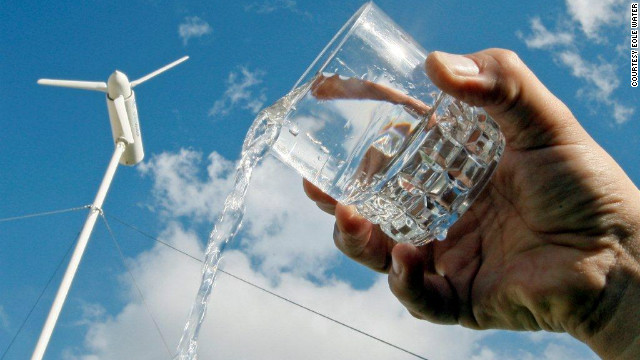 Eole Water claims to have successfully modified the traditional wind turbine design to create the WMS1000, an appliance that can manufacture drinking water from humid air.

The company aims to start rolling out the giant products for sale later in 2012, initially focusing on remote communities in arid countries where water resources are scarce.

“This technology could enable rural areas to become self-sufficient in terms of water supply,” says Thibault Janin, director of marketing at Eole Water.

“As the design and capabilities develop, the next step will be to create turbines that can provide water for small cities or areas with denser populations,” he adds.

Eole Water is currently displaying a working prototype of the 24 meter tall WMS1000 in the desert near Abu Dhabi that has been able to produce 62 liters of water an hour, says Janin.

He explains that the technology works by first generating electricity in the traditional manner of a wind turbine. This power enables the entire water generating system to function.

The next stage sees air sucked in through the nose of the turbine via a device known as an “air blower”.

All air trapped during this procedure is then directed through an electric cooling compressor situated behind the propellers. This contraption extracts humidity from the air, creating moisture which is condensed and collected.

The water gathered at this stage is then transferred down a series of stainless steel pipes, which have been specially modified to aid the water production process, to a water storage tank in the base of the turbine.

Once there, the water is filtered and purified before it is ready for use and consumption.

One turbine can produce up to 1,000 liters of water every day, depending on the level of humidity, temperature and wind speeds, says Janin.

Janin highlights isolated communities in Africa and South America as well as remote islands in Asia that have little or no access to safe drinking water as potential beneficiaries of the technology.

“If you think of Indonesia, it has (thousands of) islands and they cannot centralize their water supply … the geographic makeup of the country makes it impossible,” says Janin.

“This technique could enable them to overcome these problems and make the islands self-sufficient in a way that doesn’t harm the environment.”

But while enthusiastic about the potential of his company’s technology, Janin admits that the initial costs of the turbines could be prohibitive, especially for poorer towns or regions.

As time progresses and as an industrial process is developed that enables the company to take advantage of economies of scale, this outlay is likely to fall, says Janin.

“We have just started the commercial aspect of this product but the price is not that expensive when you compare it with the long term solution that it gives,” he adds.

New technology always tends to be expensive; hopefully the price will come down substantially once commercialised.  Rooftop rainwater harvesting is an alternative; even low rainfall areas can produce a surprising quantity of water during a rain event which can then be stored in water storage tanks.