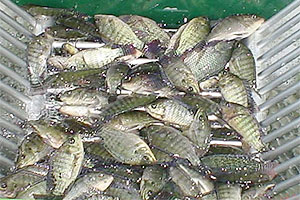 Some time ago John wrote about the environmental benefits and risks of a rise in tilapia farming. While their adaptability and relatively low position on the food chain suggested an advantage over other types of fish, there was also concern about tilapia as an invasive species. Anyone reading the New York times on Monday will have been given good reason to think twice about eating this “aquatic chicken”.

The Astounding Growth of the Tilapia Market
Exploring the flip side of tilapia, Elisabeth Rosenthal discusses the astoundingly rapid spread of this African native that may well have been the fish that Jesus was supposed to have fed the 5000 with. With Americans eating four times as many tilapia as a decade ago, there is reason to focus on the environmental impact of large-scale tilapia farming. In fact, says Rosenthal, it may be the very adaptability of the species that has lead to it becoming such an environmental nuisance:

Native to lakes in Africa, this versatile warm-water fish was deployed by many governments in poor tropical countries around the world in the second half of the 20th century to control weeds and mosquitoes in lakes and rivers. In a cistern or pond, a few fish yielded dietary protein. In retrospect, that global dispersal “maybe was not the best idea,” said Aaron McNevin, a WWF biologist who is coordinating the development of standards for tilapia farms, because tilapia “is one of the most invasive species known and very hard to get rid of once they are established.” Today, wild tilapia has squeezed out native species in lakes throughout the world with its aggressive breeding and feeding.

Farmed Tilapia Less Healthful than Wild
Because farmed tilapia are fed a diet of cheap grains and soy, rather than plankton, plants and algae, they also contain less healthy fatty acids than their wild counterparts. This dietary difference, of course, also reduces some of the environmental benefits associated with tilapia’s position on the food chain. (Although, as noted in my post on whether aquaponics is efficient, the laws of physics mean that farming cold-blooded, aquatic animals carries an inherent efficiency in terms of feed-to-yield ratios when compared to land-based animals.)

Not All Tilapia Farms Are Created Equal
Rosenthal also points out that many of the tilapia farming techniques deployed in Asia and South America—the primary producers of tilapia for US consumers—would never be allowed in the US. Most notably, the growing of fish in large open cages in natural lakes, where escapes are commonplace and fish waste is becoming a major pollutant.

Seafood Watch encourages consumers to buy tilapia from American farmers as a best choice, with Latin American fish as a “good alternative, and Chinese fish being categorized as “to be avoided”. Efforts are also underway by the fish farming industry to establish tougher environmental standards, most notably in the form of the fledgling Aquaculture Stewardship Association but for now, warns Rosenthal, “there’s no tilapia equivalent of free-range chicken.”

Maybe we all need to take up backyard aquaponics if we’re going to keep eating this aquatic chicken.

In South Africa, indigenous Tilapia species are now being used as bio-indicators of water pollution.  When non-native species are introduced into an ecosystem, the impact on on the native ecology can be severe, such as the invasive species situation now occurring in Antarctica.  However, exotic species can assist man-degraded ecosystems sometimes, see how alien giant tortoises are helping to restore an ecosystem on an island in the Indian Ocean.  But alien species have caused havoc in the past and we should have learned from experience that introducing exotic species into natural environments should be avoided or only contemplated after exhaustive research and impact studies.