Rainwater Harvesting – Why it’s so important

DuPont speeds up forecast for $1 billion in solar sales 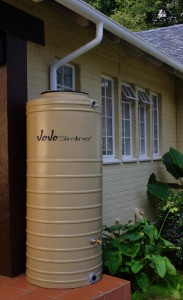 Worse yet, as much as 40 percent of a home’s potable water goes to yard maintenance. Think about it: The typical garden hose dispenses roughly 10 gallons of water per minute. Watering a flower bed for two minutes could fill some 320 drinking glasses!

Barrels help conserve potable water supplies. Treating and distributing safe drinking water is an energy-devouring, greenhouse-gas-spewing endeavor, and given many federal and state laws, most water that is piped into your home, whether it is used for cooking, or flushing the toilet, goes through treatment. Some four percent of our nation’s power goes to water supply and treatment facilities. In California, where water must travel long distances, simply conveying potable water to end users saps some seven percent of all electricity consumed in the state.

Reducing the impact of runoff and flooding. Water rushing off rooftops finds it way to paved surfaces and storm drains as runoff, which picks up harmful pollutants like animal waste, trash, and chemicals along the way and carries them to streams and oceans. Experts cite runoff as the number one cause of water pollution in the U.S.

It’s amazing that rainwater harvesting is illegal in some US States! If rainwater harvesting is not illegal, certain counties in the US still put heavy restrictions on how much rainwater can be harvested and what the rainwater may be used for.  But for the few states and counties that cling to archaic ranwater harvesting laws, rainbarrels are otherwise a  fairly common sight in America.  Rainbarrels can be simply, home-made affairs or purpose-built, commercial rainwater tanks.  In South Africa, JoJo Tanks has recently launched a water tank specifically designed for simple rainwater harvesting- the Slimline Rainwater Tank. Water Rhapsody is an authorised JoJo Tanks dealer in Mpumalanga and Limpopo; we can supply and install the Slimline rainwater tank as well as the full range of JoJo water tanks and JoJo water tank stands (we also supply high quality Atlas Plastics water tanks at very competitive prices).  The Slimline rainwater tank is simple and can be located neatly up against a wall.  Should you desire a more sophisticated rainwater harvesting system; our proprietary ‘Grand Opus’ rainwater system integrates with your existing water supply so that it can be effortlessly switched between rainwater and municipal/borehole water.  Our special ‘rainrunners’ filter the debris from the roof as the rain water passes down the gutters.  The debris is separated and the rainwater is diverted to a rainwater tank.  A big advantage of our rainwater harvesting system is that the water tanks can be placed away from the house, out of sight (unlike the traditional rain barrels that are placed under the eaves, against the wall).  South Africa is facing a water crisis on a scale that many people do not comprehend.  Water security in South Africa is a major concern.  Rainwater harvesting is one way of easing the pressure off municipal water suppliers and our over-abstracted boreholes.  Other water saving systems can be included with rainwater harvesting systems to maximize your water conservation efforts.  We also supply and install greywater irrigation systems, grey water toilet flush systems , swimming pool backwash recycling systems and special water-saving toilet flush mechanisms that simply replace your existing, water-wasting flushing mechanisms.

Water and energy are linked; renewable energy should be used whenever possible.  This has prompted us to acquire the Yes Solar Mpumalanga branch.  Yes Solar is a distributor and supplier of German-made Solsquare solar water geysers (depot is in Nelspruit / Mbombela).  Solsquare solar water heaters are SABS- and Eskom-approved and are installed by qualified solar installers (required for Eskom rebates).

Contact us for a free quote on a water system, water tank (Atlas & JoJo water tanks and JoJo tank stands) or solar geyser.  All our water systems and solar energy solutions are environmentally friendly and they save you money on your water and electricity bills!