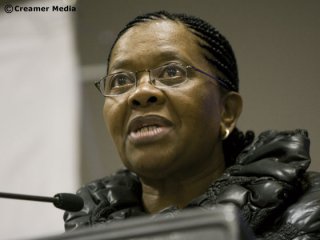 “We have taken the view that the cost of reducing pollution must be shared between people who are responsible for waste: the polluters,” she told a waste management conference in Boksburg, east of Johannesburg.

“We are now saying that the policy of ‘the polluter pays’ will be strictly pursued without any fear.”

Sonjica expressed concern about the contaminated land in the country, saying historically it was “relatively easy” for entities to contaminate land “without any serious consequences”.

The department had now finished a framework for the remediation of contaminated land.

Sonjica said the contaminated land section embedded in legislation would be promulgated soon.

She also expressed concern about the “throwaway” society and said the department was serious about setting new standards regarding waste management.

This year, it would set recycling targets aimed especially at diverting waste away from landfill.

She said urban households generated about 15-million tons of waste a year, while industry accounted for 25-million tons.

“Wherever I drive around, the sights that one comes across is not good.

“We cannot continue on the trajectory as a throwaway society. We need a paradigm shift that upholds and cherishes the age-old values that cleanliness is next to godliness,” she said.

Sonjica said it was offensive that “in this day and age” about 45% of South Africans, mainly from townships and rural areas, could not access domestic waste collection services.

“It is a major indictment to our people that we are not as yet able to offer all of them this basic service.”

She said she would soon present a policy on provision of basic refuse removal services to the poor to Cabinet.

Let us hope that these words will become action!  An earlier announcement was made stating that Environmental Courts will be established; legislating and law-making are no good if enforcement does not follow.  Hopefully the Blue Scorpions will be well-equipped and motivated to arrest and charge water polluters.  It may seem like a losing battle but the individual can make a difference by reducing stormwater runoff and lessening grey water introduction into the sewage system (stormwater runoff and grey water cause sewage plants to overflow; the contaminated water then enters our rivers and dams).  The more rainwater that is harvested off a roof and stored on the property (in rainwater tanks), the less rain water enters the stormwater drains.  Greywater is also perfectly good for flushing toilets (why use clean, drinking water for this purpose?) and gray water garden irrigation.  Water Rhapsody supplies and installs a number of other water conservation systems, not only rainwater harvesting and greywater systems (see product demo).  Water and energy are inextricably linked; we now offer solar water heating systems through our solar energy division, Yes Solar Mpumalanga.  Yes Solar markets and supplies German-made Solsquare solar water heaters that are installed by Eskom-approved solar installers.

Contact us for a free quote on a solar geyser, water system or JoJo water tank & JoJo water tank stands (we are authorized JoJo Tank dealers; our water tank prices are some of the best in the Lowveld).