Water at the core of climate change impacts

Desertification, flash floods, melting glaciers, heatwaves, cyclones or water-borne diseases such as cholera are among the impacts of global warming inextricably tied to water. And competition for supplies might cause conflicts. 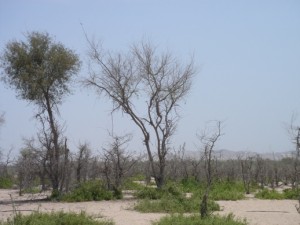 “The main manifestations of rising temperatures…are about water,” said Zafar Adeel, chair of UN-Water which coordinates work on water among 26 U.N. agencies.

“It has an impact on all parts of our life as a society, on natural systems, habitats,” he told Reuters in a telephone interview. Disruptions may threaten farming or fresh water supplies from Africa to the Middle East.

“Therein lies the potential for conflicts,” he said. Shortage of water, such as in Darfur in Sudan, has been a contributing factor to conflict.

But Adeel said that water had often proven a route for cooperation. India and Pakistan have worked to manage the Indus River despite border conflicts and Vietnam, Thailand, Laos and Cambodia have cooperated in the Mekong River Commission.

“Water is a very good medium (for cooperation). It’s typically an apolitical issue that can be dealt with,” said Adeel, who is also director of the U.N. University’s Canada-based Institute for Water, Environment and Health.

Regions likely to become drier because of climate change include Central Asia and northern Africa. Up to 250 million people in Africa could suffer extra stress on water supplies by 2020, according to the U.N. panel of climate experts.

“There are many more examples of successful transboundary cooperation than conflict over water,” said Nikhil Chandavarkar, of the UN Department of Economic and Social Affairs and Secretary of UN-Water.

“We are trying to take the examples of good cooperation — the Mekong, the Indus are examples. Even where there were hostilities in the surrounding countries the agreements did function,” he told Reuters.

Adeel said that water should have a more central role in debates on food security, peace, climate change and recovery from the financial crisis. “Water is central to each of these debates but typically isn’t seen as such,” he said.

And efforts to combat global warming will themselves put more strains on water because of rival economic demands — such as for irrigation, bio-fuels or hydro-power.

Adeel noted efforts to manage water supplies by counting how much water goes into products — from beef to coffee.

One study showed that it took 15,000 litres to produce a pair of blue jeans, he said. Making industries aware of water use could help shift to conservation. He said the world might reach a “millennium goal” of halving the proportion of people without access to safe water by 2015 but was failing in a related target of improving sanitation. About 2.8 billion people lack access to basic sanitation.

Climate change and global warming is currently a major topic of opinion, debate and scientific research.  It cannot be denied by anyone that as the human population grows, there will be more pressure on our water resources. Water is likely to become a future source of conflict between nations and even neighbours.  There are already many conflicts where water resources are at the heart of hostilities. Rainwater harvesting and grey water recycling can help individuals, families and communities to conserve water for an uncertain future.  Water saving devices can be simple or complex, depending on the circumstances.  Water Rhapsody in Mpumalanga and Limpopo can provide bespoke solutions to all your water conservation issues (we supply and install all our WWF Award-winning systems). Water tanks are at the core of our water systems; we are authorised JoJo Water Tank dealers and can supply and install the full range of JoJo water tanks and water tank stands.  As water and energy are linked, we have acquired a Yes Solar dealership to enable us to supply solar energy solutions.  Our best quality solar water heaters are made by Solsquare (Germany) and are Eskom- and SABS-approved.  We work closely with accredited solar installers so that our solar geysers are professionally and safely installed.  Contact us for a FREE QUOTE on a solar geyser, water system or water tank.