ADDIS ABABA: War over the Nile River? It seems that every few weeks, commentary is published suggesting that Egypt and Ethiopia are ready for military battles over the future of the Nile River. 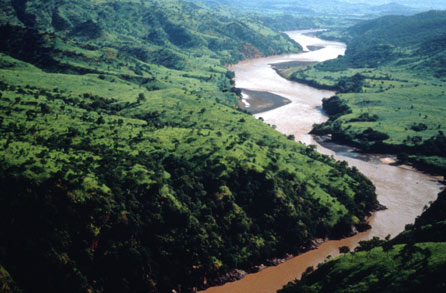 This week, Robele Ababya wrote a piece titled “Likely war over the Blue Nile River?” that highlighted the growing concern in Ethiopia over the future of Egypt’s tenuous democracy that has seen massive unrest in recent days.

Ababya wrote: “The matter is so serious that I gave it a rather scary title after a lot of soul-searching, but the arrogant stance of prominent Egyptian leaders begged for it as mentioned in the paragraph below – notwithstanding my long held dream that democratic Ethiopia and Egypt will one day emerge as powerful allies working together as keepers of stability and engines of economic growth in the region and beyond in the African continent.”

Ababya added that with the ongoing turmoil in Egypt and the uncertainty over their ability to reach compromises, the future relations with Ethiopia, despite an optimistic tinge, are not looking positive.

“But the new Egyptian regime appears to have dimmed any hope of engendering a secular democratic state given that liberal democratic political forces that have spearheaded the Egyptian revolution have withdrawn from drafting the constitution. It seems the government is bent on following in the footsteps of its predecessors,” Ababya continued.

That precedent does not engender a warm feeling in many Ethiopians, who have seen decades of Egyptian obstinate behavior over Nile water. Now, with the government in Cairo teetering on collapse, Ethiopia remains concerned over the future of what the government and its people believe is a right to water resources.

Ethiopia and Egypt have been butting heads for some time over water resources and who has a right to the Nile River.

With the first-ever Nile Basin Initiative (NBI) report on the status of the Nile River published last month, the situation between Egypt and Ethiopia and the angst between the two foes finally has some statistics and analysis to deal with. However, it is unlikely to see any changes in the current policies that have both countries eying future water resources along the world’s longest river.

Top Ethiopia government officials have told Bikyamasr.com that they are looking at jumpstarting the massive Renaissance Dam project along the Nile River in an effort to increase water resources and energy for the East African country.

The moves could threaten the regional stability after the Egyptian government said it remained “concerned” over Ethiopia’s actions along the Nile River.

The International Monetary Fund (IMF) has also called on Addis Ababa to push the dam project to the backburner in order to focus on other economic initiatives.

While Cairo has denied any intention of attacking the dam, as reported by whistleblower website Wikileaks, the country’s Water Resources and Irrigation Minister Mohamed Bahaa el-Din said last month that his country was maintaining its concerns about the construction of the Renaissance Dam in Ethiopia.

He did say that officials at the Ethiopia foreign ministry “assured Egypt and Sudan that in case there was any impact on their water quota to the dam, other projects will be carried out to collect lost water and cover shortages.”

It is the latest in the ongoing battle for the world’s largest river’s water, with Egypt and Sudan continuing to remain obstinate in amending any of the colonial treaties that guarantee their countries with a lion’s share of water from the Nile.

Wikileaks released documents this month that revealed Egypt and Sudan had been planning to attack an Ethiopian dam project to “protect” their rights over Nile water based on colonial era treaties.

In documents revealed by Wikileaks, the Egyptian and Sudanese government appeared ready to develop a launching pad for an attack by Egypt against the dam.

Wikileaks has leaked files allegedly from the Texas-based global intelligence company, Stratfor, which quote an anonymous “high-level Egyptian source,” which reported that the Egyptian ambassador to Lebanon said in 2010 that Egypt “would do anything to prevent the secession of South Sudan because of the political implications it will have for Egypt’s access to the Nile.”

Ethiopia’s massive dam project has seen much concern from Cairo and Khartoum, who fear the establishment of Africa’s largest dam would affect previous colonial deals on Nile water-sharing.

It is to be built some 40 kilometers upstream from Sudan on the Blue Nile.

But even before the official announcement of Ethiopia’s prime minister’s passing on August 20, Egyptian officials told Bikyamasr.com that they believed a post-Meles region could bring forth new negotiations and compromise over Nile water.

An Egyptian ministry of water and irrigation told Bikyamasr.com last month, two weeks before Zenawi was pronounced dead, that with the combination of Egypt’s new President Morsi and the potential of seeing a new leader in Ethiopia, they hoped the tension over Nile River water could be resolved.

“While this can in no way be official policy at this point, I believe that there would be more maneuvering with a new leadership in Ethiopia because there would be the ability to communicate and not be seen as antagonistic,” the official said, adding that they were not authorized to speak to the media.

“Let us be frank about the situation between Egypt and other Nile countries,” the official continued. “We in Egypt have not been the best at compromise so I think overall, there is so much that can be done to help bring countries together, and Ethiopia has been a leader in its criticism of Egypt so starting there would be good.”

With the Nile comes a new set of issues, and with Egypt holding onto a lion’s share of water from the world’s largest river, upstream countries such as Ethiopia have taken it on their own to begin building dams and other water related endeavors, much to the anger of Cairo.

However, officials hope that solutions can be had in the new post-revolution Egypt that could see the growing tension between countries along the Nile reduce.

“While Egypt never wants to mingle in another country’s affairs, a new leadership in Ethiopia would go a long way to changing how things are run, just like it has in Egypt,” the official added.

Disputes over Nile River water resources have been increasing as the region and the world realises the importance of water for economic growth and social well being.  It is conceivable that wars will be fought of water resources in the near future, especially in the water scarce Middle East where tensions between states are already high.  A government in control of national water resources is also in control of its citizens, for better or worse.  Individuals can become less reliant on municipal water supply by the installation of water conservation systems such as rainwater tanks or rain barrels.  See the wide range of JoJo tanks products available in South Africa by clicking on the links below.