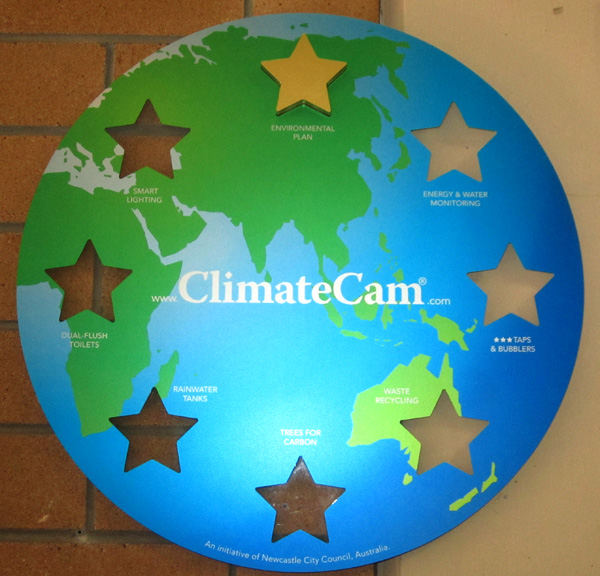 Developing a sense of responsibility in schoolchildren to care for our environment has an important role in securing their future.

These important life lessons can also translate into good business sense for schools, with some now facing annual electricity bills as high as $60,000.

Newcastle City Council has been engaging local schools in its ClimateCam for Schools initiative since 2006, a program designed with environmental and economic sustainability in mind.

The program encourages schools to work through a series of sustainability measures and subsequently awards them with “eco stars” to display on a plaque.

“The stars focus on water and energy efficiency upgrades as well as driving behavioural change across the school community,” ClimateCam for Schools co-ordinator Michelle Lindsay said.

“Another important emphasis is on making the program fun and interesting for students.” To date, 225 stars have been presented to 52 schools for initiatives such as installing rainwater tanks, tree plantings, lighting retrofits, food gardens, and recycling.

Ms Lindsay said a core component of the program was involving students in monitoring the energy and water used at their school.

“We often tell people ‘if you can’t measure it, you can’t manage it’ and that has proved particularly important for pinpointing where and when schools can make savings.

Energy audits of seven schools found that about 40per cent of electricity use actually took place during school hours.

Students at Lambton Public School discovered that halving the electricity used over weekends could be as simple as switching off equipment at the power point.

The digital revolution has also played a role in higher energy bills, with computers and interactive whiteboards in classrooms making up about 25per cent of the electricity used during school hours.

These changes have also affected household energy bills, with students charging their laptops at home.

Ms Lindsay said big savings could often be made through simple technological upgrades.

Fridges could make up about 10per cent of a school’s energy bill, if they were old models or had glass doors.

“An old fridge can add as much as $300 to a school’s yearly energy bills, so upgrading to a new efficient model is usually recouped quickly in energy savings,” Ms Lindsay said.

For the most part, though, behavioural change plays a crucial role in ongoing savings.

“We’ve seen a greater emphasis on climate-controlled classrooms than when I was at school,’’ Ms Lindsay said.

‘‘While it’s important to keep students comfortable, it’s not uncommon to find students with their jumpers off in classrooms during winter.

‘‘Unnecessary energy use can be avoided by setting thermostats in accordance with WorkCover guidelines.

‘‘Ceiling fans can also provide effective cooling in mild heat and can use as little as 2per cent of the energy of air conditioners.”

The school introduced a waste-free lunch policy six months ago and is now saving about $700 every three weeks on waste disposal costs.

Any waste that is not compostable must be taken home by students in their lunch boxes.

Healthy food choices are also promoted to parents.  Cling wrap and aluminium foil are discouraged, as are over-sized food portions.

“Parents are shocked to learn that apples often get a few tiny bites before being tossed away,” Sister Jenny Gerathy said.

“We recommend parents provide small servings of fresh fruit rather than large single pieces,” she said.

The initiative attempts to make parents conscious of packaging and food waste, and can help them to reassess how much to pack in their children’s lunchboxes.

Recent savings are being used to buy maths and science equipment and will be put towards the school’s food garden.

As well as teaching the students through waste audits, workshops and guest speakers, she said they had invested time in raising awareness among parents and staff at meetings, through online newsletters and at kindergarten orientation sessions.

Water- and energy shortages are a global concern and many drier countries such as Australia and South Africa are facing a critical problem: water resources are already strained and electricity production, especially coal-fired power plants, also requires vast amounts of water.  Many businesses and homeowners are turning to more water- and energy efficient systems, including rainwater harvesting, greywater recycling and solar power.  Rain water tanks can store substantial amounts of rainwater (especially the bigger tanks, such as the 10000 litre water tank) and can ensure that water supply cuts will become a thing of the past.  Click on the links below to see the wide range of JoJo Tanks products available, including plastic water tanks, rainwater tanks, tank stands, septic tanks, chemical tanks and other JoJo Tanks products.