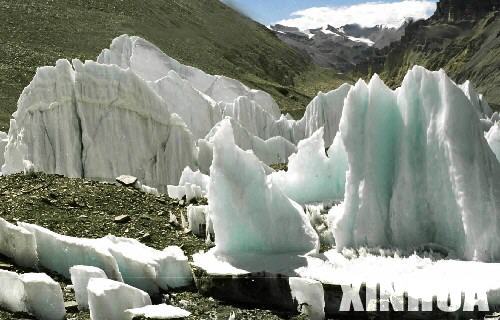 Sometimes described as the engine of the global climate system because of its role in climate and water systems, the Qinghai-Tibet Plateau in western China, with its fragile and sensitive ecosystem, is considered a “canary in the coal mine” for global climate change.

The Qinghai-Tibet Plateau covers about 25 percent of China’s surface area and includes more than 35,000 glaciers. Three of Asia’s largest rivers, the Yangtze, the Yellow River and the Mekong, begin there. Altogether, the rivers originating from the plateau supply water to over one billion people.

But as a result of climate change, temperatures are increasing much faster on the plateau than anywhere else in the world. According to Li Lin, a researcher at the Meteorological Bureau of Qinghai Province, over the past 30 years the annual average temperature has shown a significant rise, increasing at a rate of 0.37 degrees Celsius per decade. During the same period of time, the average global temperature has gone up 0.13 degrees Celsius per decade. This increase in temperature is particularly obvious in the winter.

Half the Yellow River’s water comes from its upper reaches above Lanzhou, in Gansu province. But because of global warming, the provinces of Gansu, Qinghai and Sichuan are becoming increasingly subject to drought. Surface runoff is decreasing and the groundwater level is declining. Meanwhile the population has increased and livestock breeding has developed rapidly, which has greatly reduced the water conservation function of the grassland vegetation.

As Li Lin explains, in the Three Rivers Nature Reserve, an arid zone that contains the headwaters of the Yellow River, the Yangtze and the Mekong, there is less than 300 millimeters (11.8 inches) of rainfall annually. Because of the presence of permafrost, a naturally impermeable frozen layer of soil found at high altitudes, this rainfall leads to the formation of wetlands.

However, because of global warming, the permafrost has started to melt in recent years. As a consequence of the changing nature of the wetlands, the surface vegetation is threatened, and conserves less water. This in turn threatens the river.

In addition to this, there is the worrying phenomenon of the melting of the glaciers. According to statistics published by China’s Academy of Science, between 1965 and 2008, over 130 glaciers have disappeared in the Three Rivers Nature Reserve, and 87 glaciers have split into 191 new, smaller glaciers.

Like a solid reservoir, the glacier plays a significant role in regulating water resources and in the formation of the river. In the arid northwest region, it is precisely because of the presence of glaciers that there is a river at all.

Since the 1980s, because of global warming and melting glaciers, the Yellow River’s water level has been increasing. In 2012, it reached its highest level ever. This might seem like a good thing, but in the long term, it is alarming. Such high levels of river water are not sustainable. The melting of the glaciers will gradually accelerate as the snowline continues to rise. The extra amount of water will at first increase and then decrease, just like the rise and fall of an arrow in flight.

When the volume of water in the Yellow River reaches a turning point, meltwater from these source glaciers could become a rare sight.

The causes of global warming, climate change and ecological shifts are often poorly understood and highly contentious.  What is certain is that we need to try to mitigate against the negative effects; one of the many issues is water.  Human population growth is also exacerbating the water problem in many countries of the world.  Like China, South Africa is also facing a water crisis.

Water conservation must be taken seriously and practical steps must be taken wherever possible.  Homeowners and businesses can install greywater systems and rain water harvesting systems to save water and money.  Water tanks are the heart of many water conservation systems and it is essential to choose high quality tanks that have a long service life.  In South Africa, there a numerous brands of plastic water tanks available (with some poor quality tanks ‘made in China’).  We recommend JoJo Tanks products – made in South Africa for our harsh conditions and carrying a 5-year warranty.  Click on the links below to view the various JoJo water tanks, JoJo rainwater tanks, JoJo tank stands, JoJo septic tanks and other JoJo Tanks products available in South Africa.