Climate change is bringing many uncertainties, especially to the world of water. No continent will be harder hit by climate change than Africa. 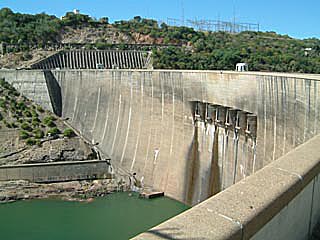 The Intergovernmental Panel on Climate Change has stated that African river basins will be especially affected by climate change, and are expected to face worse droughts and more extreme floods as a result.

Yet across the continent, large dams are being planned with no understanding of how a changing climate will affect them — and little attention to the related problem of how dams will hurt river-based communities’ ability to adapt to climatic changes. Governments and dam-lenders aren’t taking the lead on these critically important issues.

To fill this gap, International Rivers commissioned an eminent hydrologist to examine the risks to dams in Africa’s fourth-largest river basin, which is slated for dozens of new large hydropower dams. His study warns that new and proposed dams on the Zambezi River are ill-prepared to withstand the shocks of a changing climate. The result could be uneconomic dams that under-perform in the face of more extreme drought, and more dangerous dams that have not been designed to handle increasingly damaging floods.

Dr. Richard Beilfuss, a hydrologist with 20 years’ experience on the Zambezi River, evaluated the hydrological risks to hydropower dams in the basin. Overall, he says, the river will experience worse droughts and more extreme floods. Dams being proposed and built now will be negatively affected, yet energy planning in the basin is not addressing these huge hydrological uncertainties.

The report’s key findings describe a region moving toward the edge of a hydrological precipice:

The basin is likely to experience significant reductions in rainfall, and higher evaporation rates in the next century. Because large reservoirs evaporate more water than natural rivers, big dams could worsen local water shortages (and reduce water available for hydropower).

The designs for two of the most advanced dam projects have not incorporated climate change predictions and only rely on historical hydrological records. Under future climate scenarios, they are unlikely to deliver the expected services over their lifetimes, resulting in wasted investments.

The occurrence of more frequent extreme floods threatens the stability and safe operation of large dams. If dams are “under-designed” for larger floods, the result could be serious safety risks to millions of people living in the basin.

The Zambezi is already heavily dammed, and these projects have caused profound harm to livelihoods and biodiversity.
The ecological goods and services provided by the river, which are key to helping societies adapt to climate change, are not being properly valued in planning for large dams in the basin.

“Ensuring energy and water security for the future will require new ways of thinking about river basin development,” notes Dr. Beilfuss. “We must avoid investing billions of dollars into projects that could become white elephants.”

Dr Beilfuss makes a number of recommendations to help African nations weather the coming storm. First and foremost, he calls for incorporating climate change scenarios into dam design, to avoid the hazards of over- or under-designed infrastructure.

Africa faces numerous risks from climate change, including serious water stress. Successful adaptation will require radical new ways of thinking about water resources. The report notes: “While more water storage will be needed, decentralized solutions that preserve river-based ecosystem services are better suited to the needs of the rural majority, who face the greatest adaptation challenges.”

Dr. Beilfuss also recommends big-picture for energy planning. “Planners need to carefully consider dams in the context of how climate change will shape water supply, and how future river flows must meet competing demands for power, conservation, and water for domestic use, agriculture, industry, and other services. A strategy aimed at empowering people to adapt to climate change must be central to these planning efforts.”

He also calls for a full accounting of the values of ecosystem services supported by river flows, and changing dam design and operation to allow more natural flows to help restore ecosystem services on dammed rivers. The report also recommends more diversified investments in energy supply projects to “avoid putting all eggs into one basket” in a time of increasing hydrological uncertainty — an especially critical step for Africa’s most hydropower-dependent nations. Many African countries have a huge untapped potential for solar, wind, geothermal, and other renewable energy technologies that are well-suited for both urban and rural energy development.

The situation on the Zambezi is hardly unique. On nearly every continent, in many of the world’s major watersheds, large dams are at risk of becoming white elephants due to drought, and weapons of mass destruction during extreme floods. It’s akin to building dozens of nuclear reactors in seismically active tsunami zones around the globe.

We cannot afford to take a head-in-the-sand approach to the climate risks of large dams. The time is now to prioritize climate-smart investments that explicitly factor in economic risk and the values of river systems.

All too often, we hear of foreign countries ‘investing’ in Africa by building massive dams that cost millions of dollars.  In many cases, these dams result in poor African countries being tied into foreign debt for decades and/or beholden to the ‘donor’ nations in exchange for access to natural resources or political allegiance.  Localised, small-scale solutions to water and energy issues are much more eco-friendly and less costly.  Solar panels and micro-wind turbines can supply small households with a good proportion of their energy requirements.  Water solutions include rainwater harvesting and grey water recycling.  Water tanks are an integral part of any water system and should be chosen carefully to ensure the right type, size and tanks of high quality are selected.  Click on the links below to view the wide range of JoJo water tanks, JoJo rainwater tanks, JoJo tank stands and other JoJo Tanks products available in South Africa.