Cape Town – A science student has uncovered continued acid mine water drainage in a game park that could have devastating consequences for plans to build treatment plants. 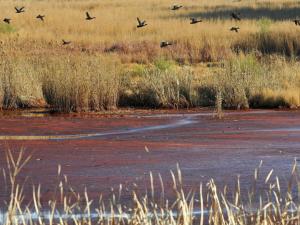 “I conducted a study in the Krugersdorp game reserve and I looked at what the contamination there is doing,” Wits BSc graduate and honours student Kirsten Olsen told News24.

She conducted testing of the contamination in the main river through the reserve and found that the evidence indicated that the aquifer was contaminated.

“We found that, because of various changes in the water, the ground water in the area has to be contaminated as well.”

While Olsen was at pains to point out that her study was preliminary, the evidence indicates that plans to build an acid mine water treatment plant may be ruined as water contamination may continue to be a difficulty.

“That means that even if they build the treatment works further upstream which is what they’re planning on doing, it won’t matter because the contamination is coming in again,” said Olsen.

She said that she didn’t specifically test to find the origin of the contamination, but indications are that its source is below the surface of the river.

“It’s going to be very difficult because it has to coming up from beneath the river: You can’t actually tell where it is,” Olsen said.

Acid mine drainage is a result of mining activity where once companies have shuttered their metal or coal mining activities on a particular mine and acidic water flows out of these often abandoned mines.

The water then makes its way to the surface, but it is complex exercise to tell exactly what the origin of the contaminated water is.

“The difficulty lies in the fact that ground water is very tricky when it comes to the surface because it could have several different sources or it could have a single source. It’s more likely to be several,” said Olsen.

In May, Water Affairs Minister Edna Molewa announced that treatment plans were in place for the western basin of the Witwatersrand, but warned that it would cost a lot of money.

“[It] will clearly need a lot of money and we need to be creative in how we approach the funding requirement in this regard,” Molewa said at the time.

She warned that up to 200 million litres a day of contaminated water may pollute surface and ground water sources.

“The incidence of acid mine drainage (AMD) and the high number of derelict and ownerless (D&O) mines, as well as dangerous sinkholes and collapsing entry points, particularly in the Witwatersrand gold fields, have effectively brought the consequences of inadequate environmental rehabilitation in the mining sector into sharp focus,” the organisation said.

Acid mine drainage highlights the challenge facing communities where long abandoned mines have made severe impacts on the environment, particularly in terms of the use of water at mines and in 2009, the Auditor General conservatively estimated the cost of clean-up at R30bn.

Olsen insisted that current plans to build a treatment plant would not suffice to treat the acid mine water.

“It’s definitely a concern because the [current] plan in the area is not going to work.”

Acid mine drainage is Gauteng is a major concern although it has been down-played by some parties.  Contamination of municipal water and private boreholes is a possibility.  Rainwater harvested from rooftops is a safer option (although we recommend that rainwater be properly filtered due to possible impurities on the roof) and also ensures that businesses and homeowners have an alternative supply of water during water supply cuts.  Always choose high quality, food-grade water tanks for storing water; we recommend JoJo water tanks – click on the links below to see the range of jojo water tanks, jojo rainwater tanks, jojo tank stands and other jojo tanks products available in South Africa.