Water is often regarded as infinite, or at least abundant. As this year’s droughts have shown, it’s anything but. 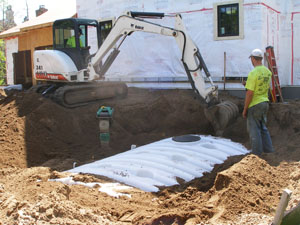 Gazing at a future in which water probably won’t be as cheap and abundant is the impetus for a new movement in design and construction: reusing and harvesting rainwater.

The idea is to minimize the amount of city-supplied, potable water that’s used for such non-consumption purposes as toilets or lawn irrigation. A number of nations, including India, have mandated that all new construction projects must make allowances for rainwater harvesting.

“In the United States, it’s been on the radar for the past five years as we’ve seen more drought,” said Phil Rolchigo, vice president of water technology for Minneapolis-based Pentair. “There’s motivation to ensure your water supply, and for contractors, there are LEED benefits. Economics is the big driver.”

Pentair, which makes a variety of pumps, filters and water tanks, recently undertook an initiative with Hartland, Wis.-based Watertronics to educate architects, consultants and engineering firms on how and when to best use rainwater harvesting systems to encourage healthier plants and landscaping — and, not incidentally, to save money for their clients in reduced municipal water bills.

“We’re talking about this to architects and engineers during the everyday course of business,” said Mike Warren, a product manager for Watertronics. “They’re very receptive. Water harvesting is a hot topic in the last couple of years with the green building movement.”

A commonly used system routes runoff from the rooftop through a sediment filter, to an underground storage tank. A submersible pump inside the water storage tank then sends it through the enclosed outdoor control panel and to the distribution system — an irrigation or nonpotable application reuse system, or both.

The latter type of system is starting to gain favor in residential construction, according to Stephen Mastey, principal at St. Paul-based Landscape Architecture Inc. Mastey’s company is currently installing a rainwater capture system on a residential double lot in St. Paul’s Highland Park neighborhood that would collect rainwater off the home’s roof and landscape and deposit it in one of three 2,500-gallon plastic water tanks made by St. Bonifacius-based Nowesco Tanks.

“It’s set up so that they don’t have to use any potable water to water their lawn if they don’t want to,” said Mastey.

The Highland Park project, off Mount Curve Boulevard, will mark the first time that the city of St. Paul will require permits for the use of rainwater tanks on a residential site, something Mastey says points toward more common use of such systems in the future.

“These cisterns are great for residential because you can just plant them under your lawn,” he said. “And for commercial applications, companies like Xerxes [based in Minneapolis] makes fiberglass water tanks that can be buried under paved surfaces like parking lots.”

The most high-profile local use of rainwater harvesting was Target Field’s rainwater recycling system, which Pentair developed with the Minnesota Twins for the stadium. The system captures, conserves and reuses rainwater for irrigating the playing field and washing down the stadium seats, reducing the ballpark’s need for municipal water by more than 50 percent.

According to Pentair, the system helped the ballpark to qualify for LEED certification and saves more than 2 million gallons of water each year.

Those results could have been even more dramatic if they had been implemented from the outset of stadium construction rather than near the end, according to Rolchigo.

“We could have harvested water from restrooms, kitchens and showers,” he said. “It goes to show that the earlier a company is engaged in the process, the larger the volume of water you can recover. Target Field was the catalyst to show that this could be done in a cost-effective way.”

Return-on-investment figures for rainwater reuse are elusive, partly because the technology is still developing and partly because the applications vary in scope. Also, retrofitting existing buildings for anything beyond landscape applications is still prohibitive. But Rolchigo estimates that for most projects, the initial outlay can be recovered in a year to five years.

Of course, there’s really nothing new about capturing and reusing rainwater; many of our grandparents kept rain barrels or cisterns to provide water for cooking, bathing and irrigation. But making such tools an essential part of new residential and commercial projects is probably just a matter of time, according to Mastey.

“The emphasis is being put more on taking this asset that we take for granted, and actually doing something with it, making it an amenity,” he said. “The idea is to get people to not rely on the city water supply.”

Governments around the world have not (yet?) placed a tax on rainwater so once rainwater systems and water tanks for storing rainwater have been set up, all the harvested rainwater is free water.  In South Africa, municipal water has been relatively inexpensive in the past but water tariffs are set to rise dramatically in the coming years (to fund repair, maintenance and expansion of South Africa’s water infrastructure).  Businesses and homeowners can protect themselves from rising water costs by installing rainwater tanks.  The satisfaction of being less dependent on municipal water supplies as well as having water during water supply outages is great!  Plastic or polyethylene water tanks are robust, easy to transport, easy to install and are available in a huge range of types and capacities (above ground water tanks and underground water tanks).  In South Africa, we recommend JoJo Tanks products; click on the links below to see more.